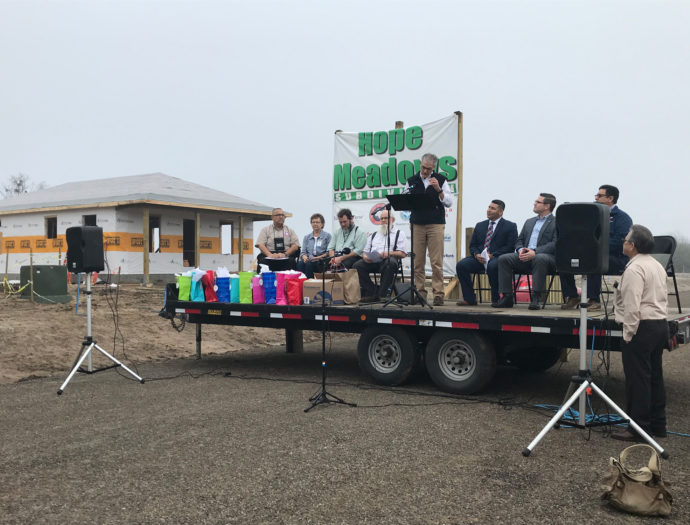 Moving into Hope Meadows: “We are really ecstatic about this new home”

When Hurricane Harvey finally swirled away from the Texas coast in August 2017, Pete Villarreal went to inspect his mobile home in Victoria. He recalls the painful sight: “Large branches from some big trees fell on the roof and punctured it. Then wind damage lifted parts of it, and massive amounts of water flowed under it.”

The flooding affected the home’s electrical wiring, and since then Villarreal has been living in the badly damaged home with his wife, his 9-year-old son, and his 7-year-old daughter. On the coldest winter days, because they have no heat, they temporarily move in with family members.

Along with damage to his own home, Villarreal has seen the lasting trauma Harvey brought to thousands of people. A member of the Texas State Guard, he was deployed to the Houston area and had to leave his family behind only days after the storm struck. “I did search-and-rescue for civilians,” Villarreal says. “I’ve seen the turmoil that’s a result of the hurricane. I’ve seen firsthand the emotional aspect of people going through that. Their children drowned in the home or in vehicles.”

After serving for two months, Villarreal was allowed to go home, and since then the family has been living in one half of the house because some rooms are too damaged and mold-infested to inhabit.

In a few weeks, the Villarreal family will move into Hope Meadows, a new subdivision of 40 homes being built in Bloomington by volunteers from Mennonite Disaster Service (MDS).

“We’re really ecstatic about this new home,” says Villarreal, who works as a materials coordinator in the pipeline industry.

He’s already met a few of his future neighbors, and has also been lending a hand, helping MDS volunteers who are working on his home. “We’ve gone out there to help the volunteers because we like to put a face with the home,” he says. “We’ve had dinner with the Mennonite and Amish community. They really enjoy our children, and our children enjoy meeting with them.”

A space of their own

Villarreal’s nine-year-old son has contracted asthma as a result of the mold and mildew in their damaged home. “It’s environmental,” says Villarreal. “He wasn’t born with it.”

Villarreal hopes his son’s asthma will disappear in Hope Meadows. “Our fingers are crossed,” he says.

His daughter is excited about having her own room again. “We’ve been living in half our house, and she hasn’t been in her room for months. She sometimes goes in there to get some of the princess dresses she wears.”

A tool to help others

Even living for so long in such a challenging setting, Villarreal focuses on the good things that happen. “I need to be out there and helping more,” he says, adding that someday he wants to volunteer for MDS and help build a home besides his own. “I keep getting blessed. So I feel like I need to do more.”