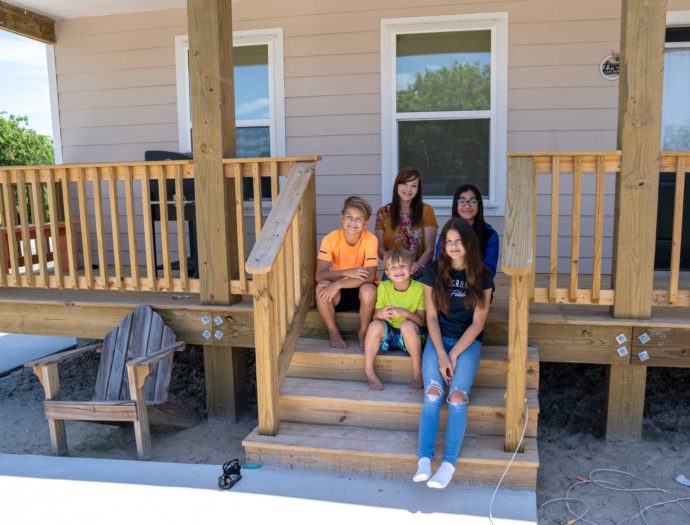 Mother of three finds a place she can breathe

It’s the last day of school and Lauren Collins takes a moment to breathe before she picks up her three kids. She’s in her place of peace—her new home, built by volunteers from Mennonite Disaster Service (MDS).

“Everything is so simple,” says Collins, of Woodsboro, Texas. “I don’t like clutter. It makes me nervous.”

Peace has been hard to come by in the three years since Hurricane Harvey hit Woodsboro,  devastating the small town. Collins’ new house is part of a 23-home community called Tierra de Esperanza, or “Land of Hope.”

The day Harvey struck in 2017, Collins finished up her job at a local bank, then drove her kids and her dog to Austin. “When we left, the storm was 50 miles away,” she says. She came back to find her mobile home severely damaged and her beloved small town devastated.

“I was just in shock,” she says. As recovery stretched into a long haul, Collins saw her marriage fall apart. “I think the hurricane ended us,” she says. “It was just too much.”

As the trailer accumulated mold and mildew in the damp walls, her youngest son began having health issues. “My little boy has really bad allergies and asthma,” she says.

In 2019, she saw a flyer at the grocery store about the Coastal Bend Disaster Recovery Group, which helps hurricane survivors find their path to recovery. She applied, and later got the word MDS was going to build her a new home using volunteers from Disaster Aid Ohio, a Conservative Mennonite disaster recovery group which is part of the MDS Eastern Ohio Unit.

“I didn’t believe it the whole time until the keys were in my hand. I didn’t tell the kids the whole time the house was being constructed. I knew they couldn’t take any more disappointment piled on if something fell through.”

When she heard that, she couldn’t quite believe it.

“I didn’t believe it the whole time until the keys were in my hand,” she says. “I didn’t tell the kids the whole time the house was being constructed. I knew they couldn’t take any more disappointment piled on if something fell through.”

When she ushered her children, Kyleigh, 14, Kaleb, 12, and Kailen, 7, through the front door in March, they were stunned. “They were in shock, then crying with happiness,” she says.

On the kitchen wall, she decided to hang a sign that says, “God can restore what is broken and change it into something amazing. All you need is faith.”

Now settled in their new home, Collins said her children have a sense of security, and she is charting a course for the future by taking college classes with the hope of owning a business someday.

“I’ve always wanted a peaceful, calm place,” she says, “a place where I can breathe. I’m forever grateful.”