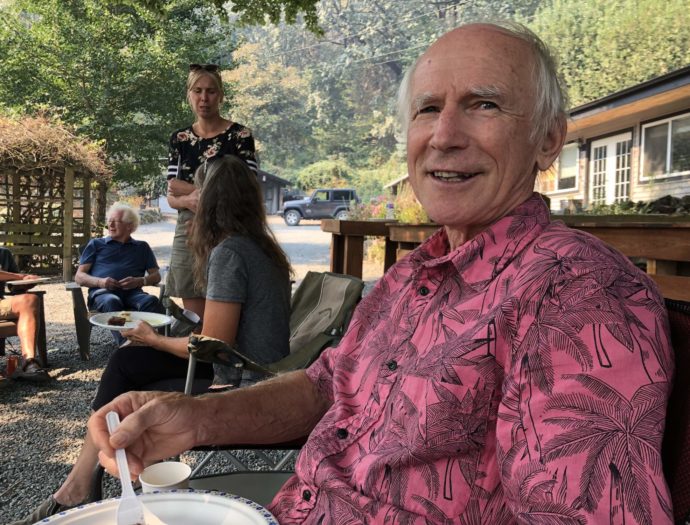 “MDS was his therapy”

After his stroke, one of the things that made Abe Gotzke sad was not being able to volunteer with Mennonite Disaster Service (MDS) anymore.

Or so he thought.

Gotzke, 72, of Abbotsford, B.C. suffered the stroke in April. “We were driving up north to Fort St. John and I noticed he wasn’t talking much,” said his wife, Shirley.

“That’s not like him. And when he spoke, it was in incomplete sentences.”

When things didn’t get better, he went to emergency in Fort St. John where a stroke was diagnosed.

“We were glad to know what it was, but it was scary,” Shirley said.

Fortunately, the stroke didn’t affect his mobility. But it impacted his speech.

The stroke also made him weak and tired and impacted his strength and endurance.

For that reason, volunteering with MDS—which was busy repairing homes in the Fraser Valley damaged by the flood of November 2021—seemed out of the question.

But he thought he’d give it a try.

“I tried painting. I went slow. But after two hours, I was done. I couldn’t do any more,” Abe said about that first day on the job.

“I told him to never apologize, and he was welcome back anytime to do what he could.”

He apologized to Mark Rempel, who was heading up the work in the Valley as part of the MDS B.C. Unit.

“He told me he was sorry he couldn’t do it,” Rempel said. “I told him to never apologize, and he was welcome back anytime to do what he could.”

Abe did come back. And each time he did he felt a bit stronger.

“I was finally able to work myself up to almost a whole day,” he said triumphantly.

He kept it simple, doing what he could. “I gradually worked up my strength and endurance,” he said. “It felt good to be able to do things like that again.”

“He still thinks he can do more than he really can do,” laughed Shirley. “But I’m glad he was able to do what he could. MDS was his therapy.”

Now that MDS’s work in the Fraser Valley is completed, Abe is thinking about the possibility of doing a week of service again somewhere, as the couple has done before in places like Grand Forks and Williams Lake, both in B.C.

“That would be nice,” he said.

For Rempel, Abe’s determination is inspiring.

“It was good to see the smile on his face after he did some caulking,” he said. “It shows that anyone can do MDS. Abe proves it.”