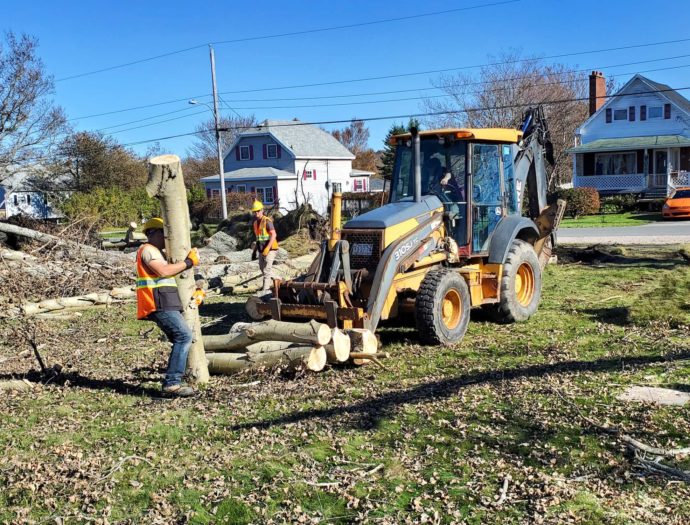 61 jobs done since end of September

“People are really thankful, they can’t imagine we are doing it for free.”

That’s what Nick Hamm said about the tree cutting service being provided by Mennonite Disaster Service (MDS) Canada in Antigonish and Cape Breton, Nova Scotia, over the past two weeks following Hurricane Fiona. These are two of the hardest hit areas in the province.

“People are super grateful,” he said, noting they are focusing on helping seniors and others with fixed incomes.

“They can’t believe people do this sort of thing as volunteers. We tell them we are doing it because that’s what our faith calls us to do, to help our neighbours,” Hamm said.

Hamm, who is part of the MDS Ontario Unit, is in Cape Breton to assist the MDS Atlantic Canada Unit, headed by Chair Benny Penner, as it responds to the devastation in the province caused by the hurricane.

“The trees are huge, up to 1.2 meters/four feet in diameter at the base” he said, adding some of the larger jobs in Cape Breton have more than 20 of these large fallen or damaged trees.

Volunteers are also tarping severely damaged roofs or patching smaller holes to keep the rain out until a proper roof can be installed.

In the one case the homeowner, a senior said, “Now I can finally sleep. I don’t have to worry about water getting into the house.”

Altogether, volunteers from Nova Scotia and Ontario have done 61 tree cutting and roofing jobs in Antigonish and Cape Breton since the end of September.

Looking ahead, Hamm said “there’s lots of work for us in this province. It won’t go away quickly.”

MDS Canada is appealing for volunteers to assist with clean-up efforts in Cape Breton. There is a particular need for experienced chainsaw operators and roofers. Accommodations and meals will be provided; travel reimbursements are available.