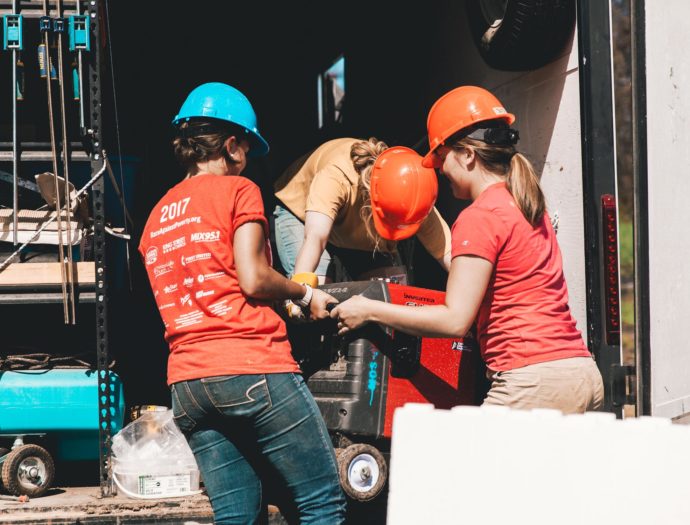 MDS Service: You Could Do This, Too

Ron Long can easily recall times in his life when his job was extremely difficult, both physically and mentally.

As a young man, after considering going into social work, he realized he liked using his hands. He began his career in construction as a laborer, working his way up to become the business owner he is today.

“I remember working for one guy who told me to move a huge pile of rocks from one place to another — for no real reason,” he said.

On another construction site, he was tasked with tamping down the dirt around the foundation of a commercial building — a job that took him a couple of weeks.

Now the owner of a self-storage business, Long was the impetus behind a youth group traveling from Vincent Mennonite Church in Spring City, Pennsylvania, to the Pine Ridge Indian Reservation in South Dakota, where, as part of an Mennonite Disaster Service Summer Youth Program (SYP), they are building homes for people who lost their residences to storms in 2015 and 2016.

The SYP is a week-long service experience designed for youth and their sponsors to put their hands and feet to the gospel by serving others. SYP project locations are usually determined by late December or early January, after which annual application forms are posted on the MDS website.

During the week, the young people worked on a few different homes among five MDS is building on the reservation. They framed one house, finally raising the walls on their last day onsite. They also painted the interior of another two houses.

“We joke that Ron’s kind of obsessed with MDS. I’ve heard that once you go on one project, you can’t stop.”

The SYP youth come for a week, living at an MDS camp in RVs, eating breakfast and dinner in a single room house, and making their lunches to eat at the worksite each day. Each morning, they share their reflections by participating in morning devotions and dinnertime reports.

They also visit local sites, and at Pine Ridge that includes the Wounded Knee and Crazy Horse memorial sites as well as Mount Rushmore.

Although Long has been a volunteer many times for MDS, and the youth have been on mission trips before, this is their first time participating in an MDS project.

“Ron was the one who really had the idea to get us involved with MDS,” explained Alyssa Breidigan, 16. “We joke that Ron’s kind of obsessed with MDS. I’ve heard that once you go on one project, you can’t stop.”

Both Breidigan and Laura Taraboletti, also 16, traveled to Puerto Rico, last year, where they helped renovate a Mennonite school. Although not an MDS project, the young women said some aspects of the mission trips were the same.

“When you are on a mission project, you need to go with the flow,” said Taraboletti. “You do what you’re told to do.”