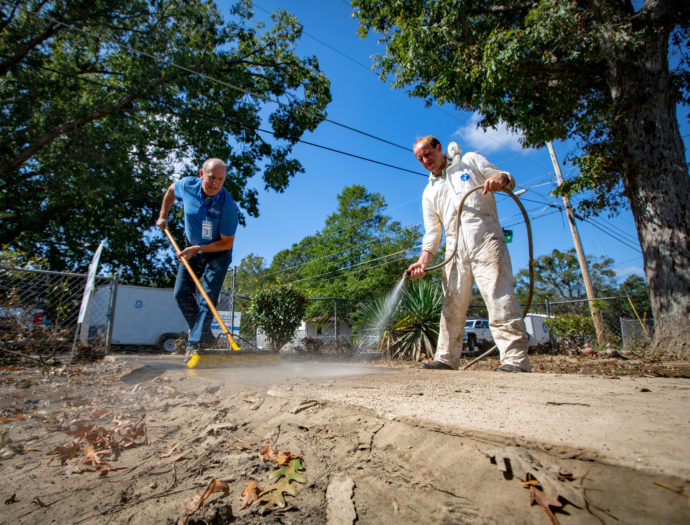 Lafayette, LA – Bruce Weber, Mennonite Disaster Service (MDS) project director in Lafayette, Louisiana, spent several months this fall getting flood survivors back into their homes. In the wake of an August 2016 unnamed storm, hundreds of people in Lafayette were facing massive cleanup and repair jobs.

By November, the pressure was even greater to get people back into their homes since Federal Emergency Management Agency (FEMA) funding for lodging in hotels was running out.

“We’ve been doing a whole lot of drywalling,” Weber said, as he drove around checking on volunteer crews and homeowners just after Thanksgiving.

As Weber has gotten to know the Lafayette community, he finds that people have already heard of MDS. “MDS is known and remembered,” he said.

A group of a dozen Amish volunteers was in route after a long drive to a work site, and they stopped at a restaurant, Weber said. “They went to pay for their lunch and the restaurant owner told them their check was paid as a way of saying thanks for the work MDS has done in the past and in the present.”

Weber said his predecessors have often developed a trust in the communities in which he works. “My career was farming. We always had a saying that we are borrowing our land from our grandchildren. I’m quite aware of the MDS teams that have come before mine, and those that will come after.”

How do Weber, and his wife Marj, stay on the road for months at a time? Weber thrives on helping volunteers have a good experience, and a healthy dose of humor is an important part of his volunteer management style. He has named the five vans transporting the volunteers – The Grape, The Boss, Later Gator, Big Dude and Spunky – and designed magnets to stick on the back.

For Marj, who serves as office manager, handling details comes naturally, and she arrived with Bruce on Oct. 23. The couple will depart on Dec. 16.

Her key to being on the road is to find the joy in the present moment. “It’s not that you’re unhappy where you are, because we really love doing this. It’s that you have to be where you are. When we are here, we are with the people who are here.”

This sense of cheer, and of being wholly present, keeps volunteers as well as homeowners smiling.

And keeping a positive attitude can be very tough, said Lafayette resident Dana Shay. “I keep thinking I’m going to wake up from this nightmare,” she said. But today, she has a sense of hope because MDS volunteers have made significant progress repairing her home. “The flood happened so fast, there was no time to pick up anything or salvage anything. It really just came out of nowhere.”

Her husband, Sean, said their recovery is much further along thanks to MDS. “I don’t know where we’d be without these guys. They have been so gracious and compassionate,” he said.

Weber’s goal is to hear words like that from every person MDS helps. Before heading out for the day, he reminds volunteers: “Remember, you’re the answer to someone’s prayer.”

By Susan Kim for MDS