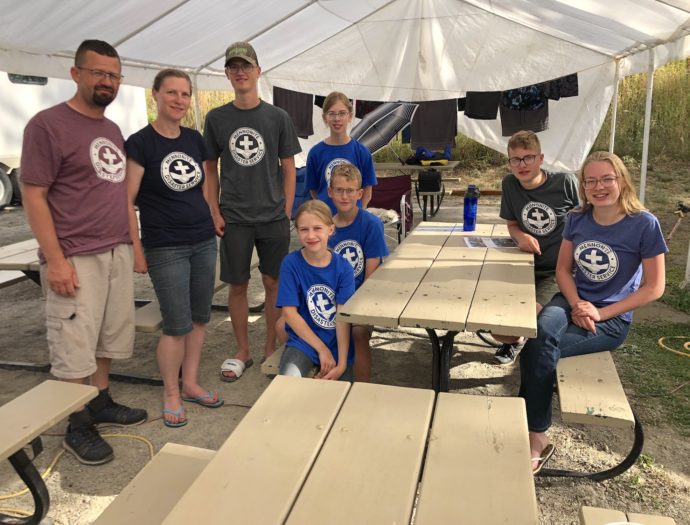 MDS family project a “good combination of work and play”

“We wanted to give our children the experience of serving others.”

That’s the reason Peter and Susan Neudorf of Warman, Saskatchewan gave for signing up for the Mennonite Disaster Service (MDS) family project in Princeton B.C. in August.

Together with their children—Ashley, 20, Joshua, 18, Andrew, 15, Emma, 14, Jason, 11 and Abigail, 9—the couple spent time serving and playing together the second week of August in the southern interior community.

In addition to doing landscaping, painting and other odd jobs for homeowners, the family went tubing on the Similkameen River, swimming in a nearby lake, visited the local museum, walked nearby trails and did gold panning—and other fun adventures.

“I liked painting,” said Abigail, noting she managed not to get too much paint on herself.

“I liked painting, too,” added Emma. “It was good to work with my family.”

The Neudorfs, who attend the Warman Bergthaler Mennonite Church, learned about the family project in their church’s bulletin.

“When we saw it, we both looked at each other and thought the same thing,” said Peter of the couple’s reaction.

“With our children getting older, we thought this might be the last time for a vacation together, so let’s do it now,” added Susan.

They rented a trailer and drove to 1,420 Kilometres/820 miles to Princeton.

The long drive was fun, but eight people in a trailer was a bit “squishy,” Emma said.

The week-long experience “lived up to our expectations,” said Susan. “We have had good family time and good service time.”

“It was good to show the kids the importance of volunteering and serving others,” said Peter.

Also serving at the project this summer was the Bueckert family of Neuanlange, Saskatchewan—parents Kevin and Theresa and children Keaton, 16, Seraya, 14 and Owen, 12.

For them, “it was awesome, a really good time,” said Theresa. “When it was over, we weren’t ready to leave.”

“It was really enjoyable,” added Kevin, noting this was the second time the family has done MDS service together.

“We really liked working together as a family and giving back.”

Like the Neudorfs, they also appreciated the recreational time built into the project. “It still felt like a holiday,” Kevin said, adding they are already planning to do it again.

Stephen and Carol Reist and their son, Daniel, 10, drove from their home near Toronto, Ontario, to serve in Princeton with MDS.

The family, part of the Danforth Mennonite Church, had been planning an extended vacation for a couple years, including time in the mountains.

“When we learned about the project in Princeton, we decided to do it,” said Stephen.

For the family, it was good to do “meaningful, hands-on service together,” said Carol, adding “it was such a good feeling to do it with our son.”

In addition to the service and the recreational activities, they enjoyed meeting new people.

“We got to know some wonderful people,” said Carol, adding the project directors, Elivra and Philip Wiebe of Grande Prairie, Alberta, created a “great atmosphere” for the project.

For the Wiebes, the month-long project was a success.

“We tried to make it a good combination of work and play,” said Elivra, noting a total of 29 volunteers worked on six houses making decks, putting up fences, painting, landscaping and other things.

Philip enjoyed the “enthusiasm of the volunteers, from the youngest to the oldest,” he said, adding “I didn’t think we’d get all the work done. But everyone worked hard.”

“We accomplished more work than we thought we would get done,” said Elvira.

Beyond helping homeowners now, for the Wiebes the family camp was also about the future of MDS.

“We were building the foundation for new MDSers,” Philip said, noting the focus for devotional time was “Why MDS.”

“Everyone who came said they wanted to do MDS again,” he said.

The MDS project in Princeton is now closed. But MDS is still active in B.C., rebuilding four houses destroyed by wildfire in Monte Lake. More volunteers are needed there through fall; go here to learn more.