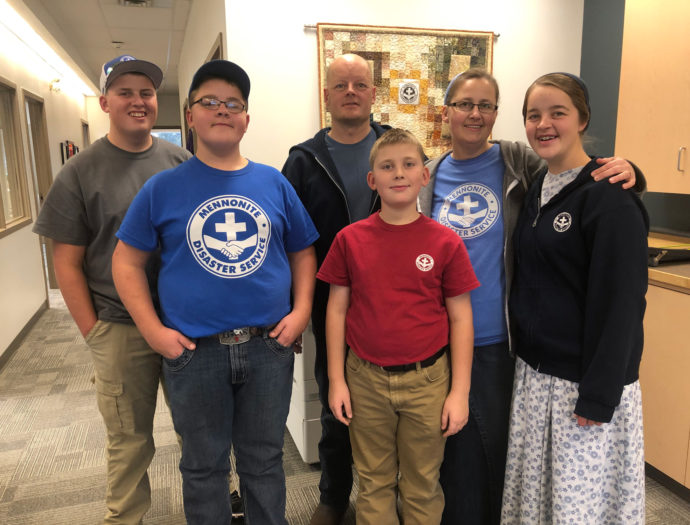 MDS “a good fit for our family”

In early 2019, the Wiebe family of Austin, Manitoba set off on a service adventure of a lifetime.

From January to December, last year, they drove over 30,000 kilometres from Manitoba to Texas, to South Dakota, to Newfoundland, and then back to Texas. Now they are back home trying to settle into normal life.

“It was an amazing year,” says Pamela of their time with MDS. “We are so thankful for the opportunity to serve others. We grew closer as a family.”

A special highlight of the year for the Wiebes, members of the McGregor Sommerfeld Mennonite Church, was meeting the homeowners they helped and making new friends across North America.

“It was great to see the joy on the faces of homeowner as they saw their houses repaired,” says Brianna. “It was special to know this is what Jesus wants us to do, showing God’s love to others.”

As for making new friends, that was both a blessing and a sadness, says Pamela.

“I cried more this year than ever before saying goodbye to all the people we met,” she says.

During the year, Pamela served as a cook, with help from Corey, while the others worked on houses.

“The kids were able to get an education in construction,” says Dan, noting they were able to see a house built from start to finish.

“It was a different kind of education,” adds Pamela, noting the children are home-schooled. “It was more hands-on learning than book learning.”

At the same time, through their travels “they were able to see so much of God’s creation,” she says. “They have memories for a lifetime.”

Along with the cooking and building, the Wiebes also sang for the volunteers and at local churches in the community. “It was another way we could serve,” says Pamela.

The family also grew spiritually. “We learned to rely on God,” she says. “He helped us in so many situations.”

This isn’t the first time Dan and Pamela have done service with MDS; Dan had done it four times earlier, and Pamela did it once with him before they had children.

The idea for doing it for a whole year as a family came while they attended the all-unit meeting in Winkler, Manitoba in 2018.

“We were inspired by stories of others who had done longer-term service,” he says. “We thought maybe we could do that, too.”

When told of the idea, the children were excited. Pamela admits she was less enthusiastic at first.

“When Dan suggested it, I thought no way,” she says. “But the Lord led us to a place where we could see how everything would work out.”

During the year away, MDS covered expenses—food, fuel and other miscellaneous costs. Friends and family also contributed financially.

The first month away was the hardest; that’s when they most missed their relatives and friends. But it was quickly replaced by all the new friendships they made with other volunteers and local people.

“We have friends all across North America now,” says Brianna.

Now that they are back home, Dan—who owns his own truck repair business—is getting his business up and running again. The kids are back into regular schooling, and Pamela is still looking for stuff they packed away over year ago before renting out their house and leaving.

“It’s good to be home, but we all feel unsettled,” Pamela says. “We’d all like to serve again. If we could, I think we’d turn around and head back in a heartbeat.”

“Service is a part of life, an expression of our faith,” adds Dan.

“We are called to go and share the love of Christ with others,” says Pamela. “There are many ways to do that. For us, MDS was a good fit for our family.”