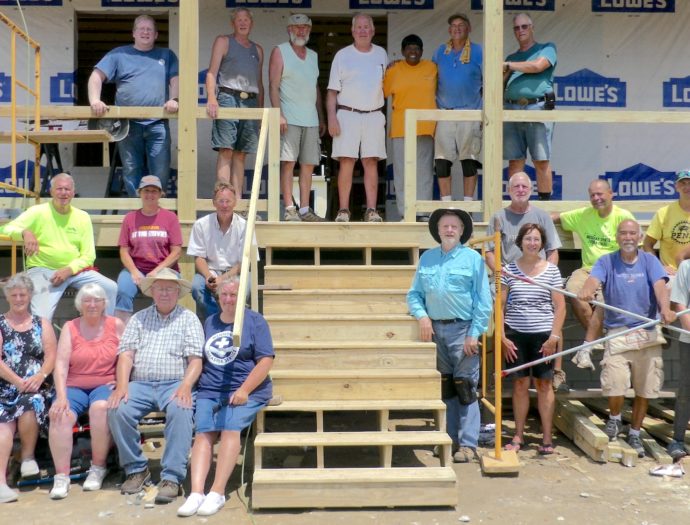 What’s that clapping and cheering on the corner in Crisfield, Maryland? It’s the sound of Mennonite Disaster Service (MDS) volunteers sharing their joy as 85-year-old Hazel Cropper walks up the front walk toward her new, partly constructed home.

Cropper was one of about 2,500 residents in the Eastern Shore town affected by repetitive flooding over the past several years.

During mid-July—as temperatures and humidity soared—30 volunteers came from The Meeting House (Brethren in Christ) in Carlisle, Pennsylvania, to spend a week in Crisfield, staying at the MDS base camp and working on Cropper’s home.

Charles Sieber, the group’s leader, said this is the first time the church has worked with MDS, though the group has built more than 60 houses and several churches in partnership with various groups, mostly in the eastern United States.

“We have a lot of contractors in the church, and we wondered if we could get them to take a week off,” said Sieber. “Turns out we could,” he added, looking up as volunteers installed the roof on Cropper’s home.

”Some are retired and some are taking vacation,” he added.

For the past several months, the town of Crisfield has welcomed MDS volunteers in many special ways. Crisfield resident Barbara Tyler, owner of the local flower shop, stopped by with lunch subs for the group.

“I’ve lived here for 55 years,” she explained. “I didn’t know if we could help the volunteers—but I decided I’d stopped by and ask if I could bring them lunch today.”

MDS Project Director Gary Martin said that kind of generosity runs through the streets and waterways of Crisfield, situated on the Tangier Sound.

Martin, who lives in Alaska, is serving as a project director for three weeks—the first time he has held the position since attending MDS leadership training in December 2020.

Martin said he will miss Crisfield when he returns home.

"I didn’t know if we could help the volunteers—but I decided I’d stopped by and ask if I could bring them lunch today.”

“The people here are so welcoming,” he said, noting a local plumber brought the volunteers chicken and pizza, another resident brought freshly-caught crabs to share, and yet another, when he heard volunteers wanted to try their hand at crabbing, stopped by with chicken necks—a popular crab bait in Maryland.

Neighbors often stop by to thank the volunteers with a smile and a wave, or even just a thumbs-up out the car window.

In fact, he was hesitant to make the trip, knowing he probably couldn’t work the same hours as some of his younger counterparts. But the group convinced him to come and serve as an ambassador with the townspeople.

“So I’ve been visiting Hazel Cropper,” he said. “She’s feeling that, at 84 years old, she has a lot of purpose in life. She’s got all of these children and grandchildren—and she’s determined to keep them in church.”

Marley said that resonates with what he does at his own church: keeping young people in the fold. He believes that happens through hands-on service.

“We’ve been working on panels for these homes in our church parking lot, then bringing them to Crisfield,” he said. “One young man—he’s 21—helped me build some panels, then he came to church the next Sunday. His mom said that’s the first time he’s been to church in a year.”

Manley commended the way MDS draws young volunteers. “We have to really think about the next generation,” he said.

As Hazel Cropper got ready to pose for a photo with the volunteers, her children and grandchildren helped her find her earrings shaped like crabs, and her special, signature, bright orange T-shirt commemorating her accomplishments as the 16-time crab-picking champion of the world.

The volunteers clapped and cheered as she walked up the steps, taking Martin’s hand to help her up the last step. “

If your hand is in God’s hand, you’ll be alright,” she said, turning around with a smile. 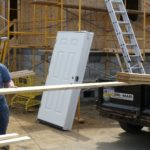 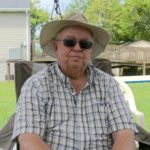 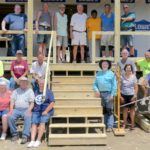