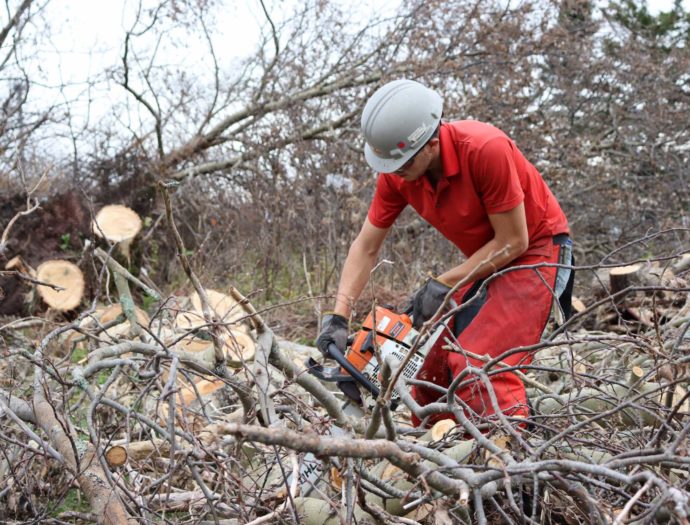 The hurricane struck the province September 24, blowing down thousands of trees and damaging homes. The Cape Breton region of Nova Scotia, where MDS was active, was particularly hard-hit.

The first volunteers from the MDS Canada Atlantic Canada Unit arrived September 30. Members from the Ontario Unit came on October 3. Soon after that, the hurricane was declared a national response for MDS Canada and volunteers came from across the country.

Volunteers served in Cape Breton until December 10, when the response was closed for the year due to the onset of winter.

“After seeing how much destruction there was, MDS transitioned to a national response,” said Nick Hamm, chair of the Ontario Unit, who played a key leadership role in organizing that response and coordinating MDS activity on the ground.

“MDS was the only agency helping homeowners with tree and debris cleanup until the Nova Scotia government stepped in in October,” he added.

At the same time, MDS was the only organization providing roof repair and rebuilding for people who were uninsured or underinsured, Hamm said.

Of his time in Cape Breton with MDS, Hamm said “it is difficult to convey the many thanks and tears expressed to me on behalf of the volunteers from the residents we served, from other community members who didn’t need MDS help but appreciating our presence, and from our partner agencies.”

Another person who wanted to convey her appreciation was Lynne McCarron, Executive Director of United Way Cape Breton, the organization MDS partnered with most closely for its Hurricane Fiona response.

“We will be forever grateful to MDS volunteers for coming to help and support our most vulnerable community members, at a time, when they needed it most,” she said.

“We will be forever grateful to MDS volunteers for coming to help.”

Most of the people MDS assisted didn’t actually reach out for help, she noted.

“If it wasn’t for volunteers visiting an area and knocking on doors, we wouldn’t have known the extent of their needs. MDS worked with us to build trust with the hurricane victims and helped us to provide insight into the areas of greatest need. It was a truly collaborative experience.”

She added: “We do not know what we would have done without MDS help. The fact that volunteers came here as perfect strangers and provided such a massive amount of support gave people the strength and hope they needed to survive this disaster. It’s like you were able to give them a big hug, and who doesn’t appreciate a hug in a time of need.

“The words ‘Thank You’ do not seem nearly enough to show our appreciation for all that you have done.”

Added Cape Breton Regional Municipality Mayor Amanda MacDougall: “The winds of Fiona left a wave of damage and destruction, with many community members left wondering how they were going to pick up the pieces and fix their broken homes.

“We are forever indebted to MDS, who had teams on the ground for two months, volunteers from across Canada who stayed in our community and helped people rebuild their homes. The service they have so generously provided residents is truly amazing and I don’t know how we can ever repay their kindness.”