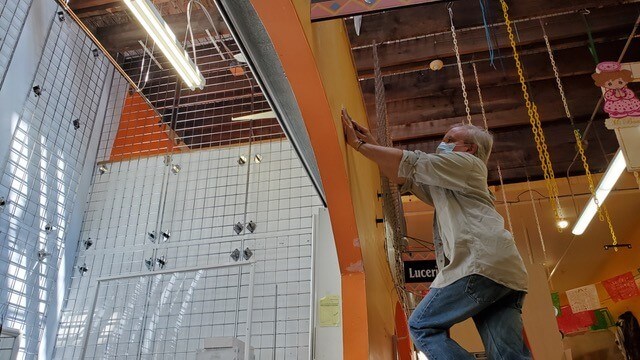 In Minneapolis, “you can just see the hope in their eyes”

After the death of George Floyd, people in Minneapolis  took to the streets to work through their pain and their anger. During the protests, some stores and businesses were looted and damaged.

Following this time of turmoil, MDS volunteers reached out to respond in Christian love.

The response began with a small group from Faith Mennonite Church when several volunteers walked through the south Minneapolis neighbourhood that was the scene of both peaceful protests and damaging disturbances. Bringing brooms and dustpans, they  swept up broken glass and other debris.

Cleaning up as they walked, they found themselves on Chicago Avenue, where Floyd was killed. Described by  Mennonite Disaster Service (MDS) Minnesota Unit Chair Glenn Geissinger  as “a sacred space,” it was filled with people, flowers and commemorative paintings.

“It continues to be a tremendous community gathering space to commemorate his life and him as a person,” said Geissinger.

Along Lake Street, two mercados, or markets, had been hit particularly hard by vandalism and looting. Through connections with  the Minnesota Voluntary Organizations Active in Disaster, Geissinger asked how MDS could help.

Together, volunteers from both MDS and the Jewish organization Nechama, which means “comfort” in Hebrew, have been helping Hispanic business owners clean up and re-paint their shops. Amid COVID-19, Geissinger ensures volunteers keep social distance and wear masks.

Response has grown to include volunteers not only from Faith Mennonite, but also from Emmanuel Mennonite and Woodland Hills Church. “Because of COVID-19, we can’t have anybody overnight,” explained Geissinger. “It’s all local volunteers.”

The volunteers have continued to work alongside the business owners and their families, who sell clothing, shoes, and food in the mercados. Geissinger, who is not fluent in Spanish, began hearing sounds of laughter and joy from workers in the mercados, some of whom are now back in business.

“Just to hear their laughter is so hopeful,” he said. “You can’t help but be moved. You can just see the hope in their eyes. I think this is a very different type of opportunity and one that resonates well with MDS.”

MDS volunteers also are helping in other ways, such as loading food into trucks that are delivering it to pop-up food shelves to feed families who now live in food deserts in neighborhoods because of ransacked grocery stores. Others are assisting in a camp for some 400 homeless people that has been set up in a city park.

Volunteers Dan Leisen and Andi Kuenning, members of Faith Mennonite, found a special way they could help. They are part of a group that, each morning, opens a shower trailer, provided by Nechama, so that people in the camp can access it. In the evenings, Leisen, Kuenning and other volunteers unhook the electric lines, put the propane tank inside, and lock the shower trailer up for the night.

“It was a small way for my wife and me to help,” said Leisen. “She’s 67 and I’m 69. Because of the virus, we’re concerned about being too close for a sustained time.”

As advocates in the city work to find homes for people in the camp, Leisen and Kuenning plan to keep helping. “We really care about the people,” Leisen said, “and the virus is making it more complicated to get out there and be connected.”