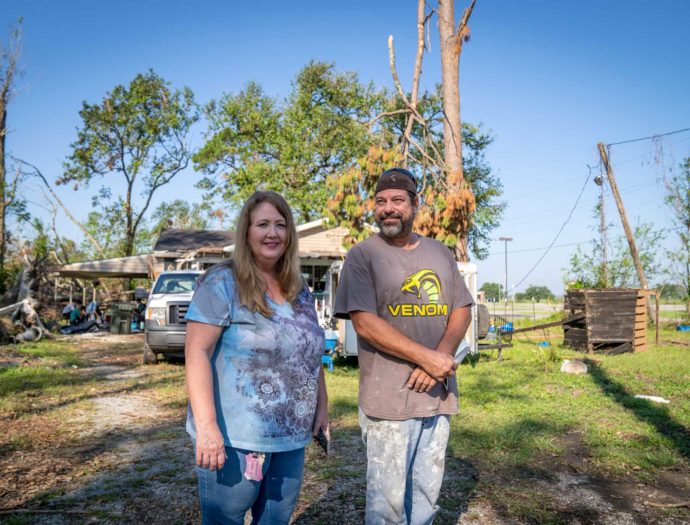 In Louisiana, “elsewhere” is on the map for young MDS volunteers

Philip Hirtle pulled moldy drywall, soggy carpet and bedraggled belongings out of his mother-in-law’s home, sweating in the early October Louisiana Gulf Coast heat, hauling pickup truckload after truckload to the growing pile at end of the long, gravel driveway.

“This little community is called Ellsworth—but we all call it ‘elsewhere,’” Hirtle said, looking at the sprawling yard that held huge trees until Hurricane Ida slammed into the rural area on Aug. 29.

Ida was the second-most damaging and intense hurricane to make landfall in the state since Hurricane Katrina in 2005, and the fact that the two storms both hit on Aug. 29 made news headlines across North America.

Ellsworth never made the headlines, yet residents there are still dealing with the storm’s after effects.

Given the damage to his mother-in-law’s house—including a hole punched in the roof by an uprooted tree, followed by a deluge of rain that soaked through every surface, followed by black mold now creeping up what’s left of the walls—Hirtle considers it a miracle the house is still standing.

A handyman by trade, he’s determined to help his mother-in-law rebuild her family home, even if he has to do it by himself.

But that day he didn’t have to go it alone; a group of Mennonite Disaster Service (MDS) volunteers, most of them 17 or 18, had traveled from their Amish community just outside Lancaster, Pennsylvania to help.

“We’re more blessed than some of the others,” Hirtle said. “What these volunteers have done in one hour would have taken me all day.”

For Hirtle, hurricane recovery in this rural community has been about making sure nobody has to go it alone.

“My mother-in-law doesn’t have anybody, but she’s a strong spirit,” he said. “Isn’t that why we’re put on the planet—to help others? We do what we can.”

The young MDS volunteers shared both his theology of service and his willingness to work hard.

Seventeen-year-old Kathryn Marie Lapp paused as she dumped an armful of broken drywall into Hirtle’s truck. “I feel that we’re making a difference for people,” she said. “I just want to be there for them somehow.”

“My mother-in-law doesn’t have anybody, but she’s a strong spirit,” he said. “Isn’t that why we’re put on the planet—to help others? We do what we can.”

As she got ready to go back for another load, she expressed one regret: “I wish I could stay here and help repair this house,” she said. “I would if I could.”

Volunteer Verna Petersheim, also 17, said she believes work like this makes a difference, and not just a small one.

“I came because I wanted to be a blessing to the world—to people who are in need of help,” she said.

Amos Glick, an MDS crew leader who coordinated the trip for 18 young people, said they’d been looking forward to traveling for a long time.

“They like to contribute to something like this,” he said. “They will change the way they look at life, after this.”

Hirtle said hurricane recovery isn’t just about hauling ruined belongings—it’s about people sharing the gift of each other, no matter how different they are.

“God puts people in other people’s path for a reason,” he said. “We should learn from each other.”

Later in the day, his mother-in-law, Susan Trahan, stops by to check on her home. She evacuated as Hurricane Ida approached, watching the news from afar and fearing for people who stayed.

“People started telling me I was going to lose everything,” she said, adding this is by far the worst hurricane damage she’s seen in Ellsworth. But she’s more than ready to move back home, where she’s lived since she was seven years old.

Amid this early stage of hurricane cleanup, Trahan sees more than piles of stuff. She also sees decades of memories: family gatherings, advice from her own late mother, and, especially, sharing meals that celebrate the flavors deeply rooted in so many families along the Gulf Coast.

She wants to carry on that tradition. “This is my home. This is where my family is,” she said, putting an arm around Hirtle, “and he makes the best gumbo on earth.”