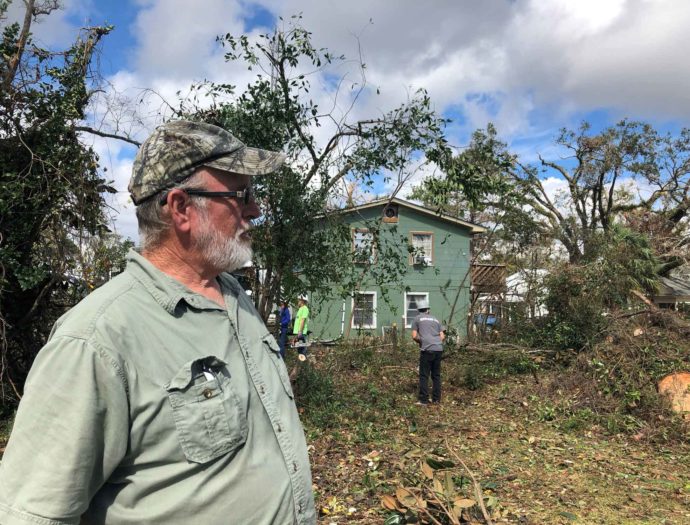 Homeowner Dwight Cloud, who has served as a volunteer twice for MDS, is now on the receiving end.

Dwight Cloud is still, little by little, clearing debris from his yard, more than two weeks after Hurricane Michael struck his town of Marianna, Florida. Though his 100-year-old house somehow weathered the storm, he lost many large trees, some of which are precariously perched, making it unsafe for him and his wife to continue with their cleanup.

Today the debris-clearing pace will pick up immensely: a Mennonite Disaster Service Early Response Team (MDS-ERT) has arrived, with equipment and expertise, to help remove the largest toppled trees from Dwight’s yard. 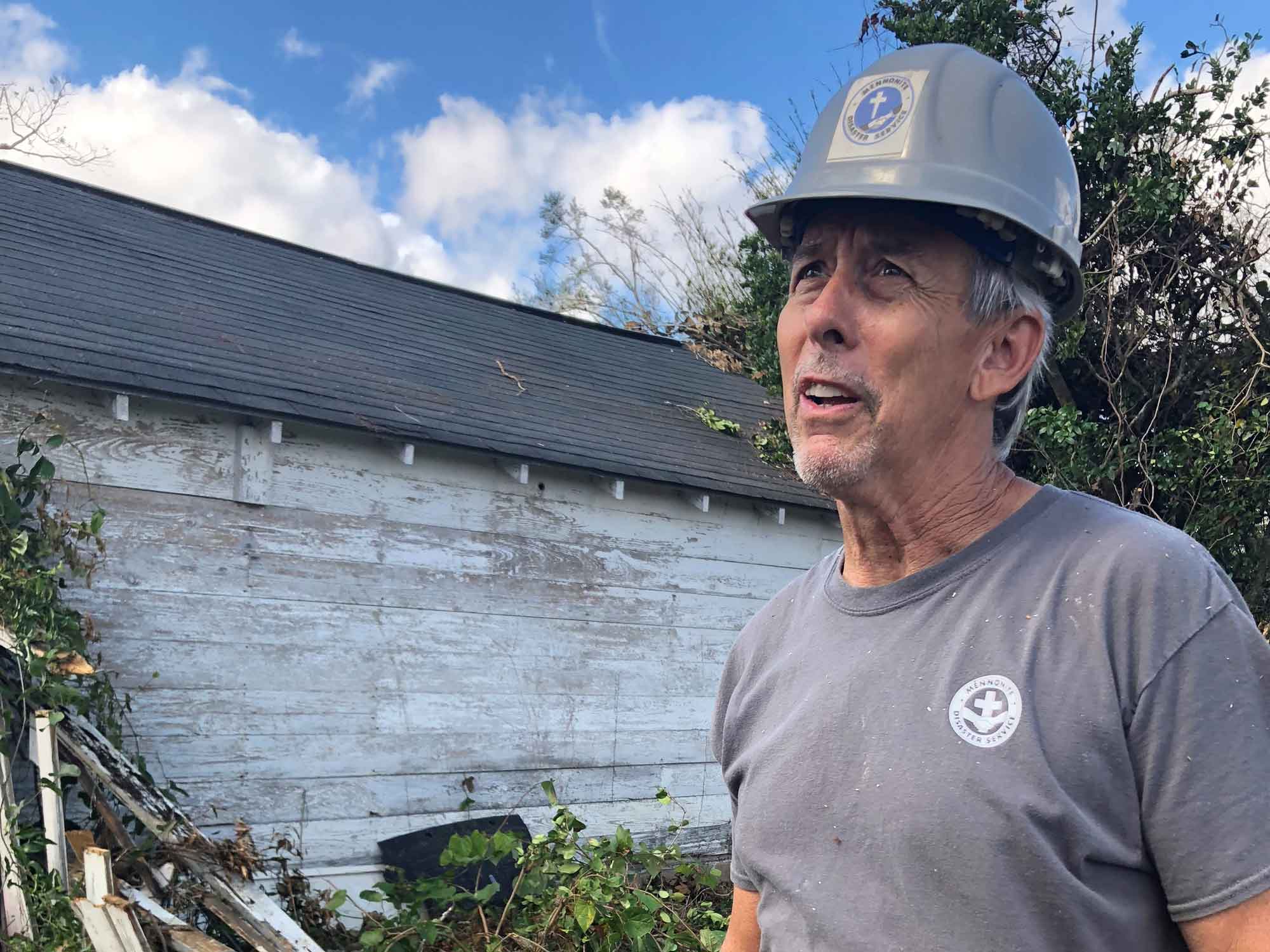 Florida unit chair Ervin Miller brought an ERT of four volunteers who joined him in clearing large trees and other debris.

Dwight is in a new emotional place: after volunteering twice on an MDS crew during the 1990s – both times in North Carolina after flooding – he now finds himself on the receiving end.

“I never thought I’d be the one needing the help,” he said, “but I can’t do it myself this time.”

A semi-retired construction contractor, Dwight now works alongside the MDS-ERT as the team uses chainsaws, a Bobcat, and their work glove-clad hands, making rapid progress cleaning up the yard. 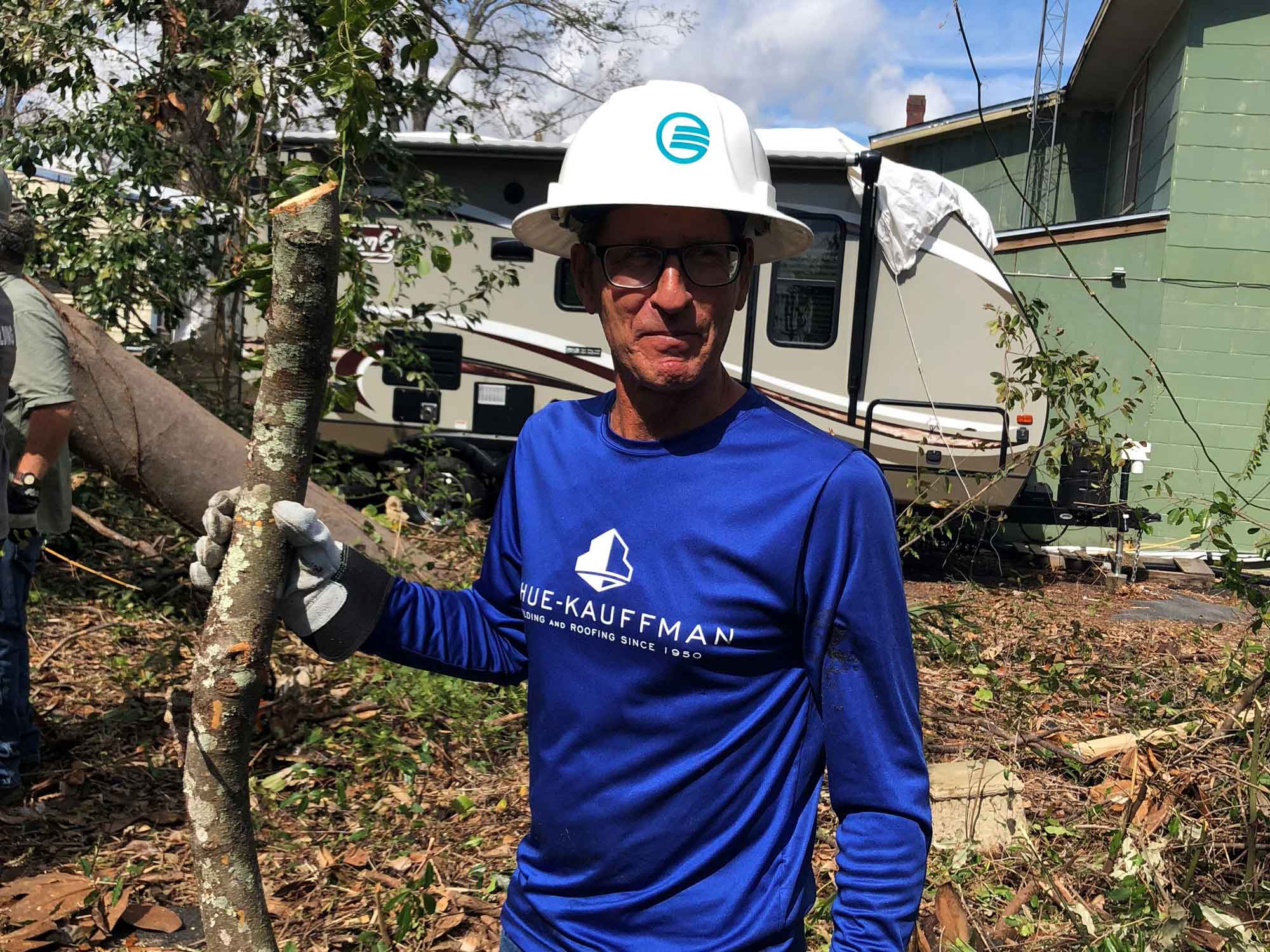 Volunteer Scott Kauffman traveled from Sarasota, Florida, to help clear debris from the home of Dwight and Beth Cloud.

After this, Dwight said, he will go on to help others in a community, a place he loves. “I am just so sorry for everybody,” he said, glancing up the street at neighbors’ homes that fared worse than his own. He and his wife, Beth, evacuated during Hurricane Michael, returning a few days later when they had trouble accessing their neighborhood road because of wreckage blocking the roads. Now going on 17 days without power, the Clouds are nonetheless grateful for what they have.

Dwight’s wife, Beth, returns home from the Rivertown Community Church, where she has been helping to organize relief for hurricane survivors. She, too, feels blessed that Hurricane Michael spared her home.

“I’m a canner,” she said. “I’ve been putting up food for a long, long time. When we evacuated from the storm, and we watched how bad it was going to be, I thought, ‘Well, that’s all gone.’ ”

Somehow, despite trees falling all around, the house – and Beth’s jars – were unscathed. The Clouds are taking this as a sign that they need to help others.

For so many people – for the very fabric of the town of Marianna – nothing will ever be the same, Beth said. “I believe right now it comes down to neighbor helping neighbor,” she said. “Everyone I have talked to who stayed through the storm has been traumatized. They heard the trees cracking around them.”

At Rivertown Community Church, Beth watches teams from MDS, along with other faith-based and community-based organizations, fan out to help Hurricane Michael survivors. While the massive relief response gives her hope, she also acknowledges the sheer geographical spread of the damage, and also how the maps posted by the press don’t tell the whole story of people’s pain.

“I see people come to the church who have four kids in the car and no place to live, and they feel helpless and frustrated. Sometimes I ask: Can all this go away? Can we go back to pre-Michael?”