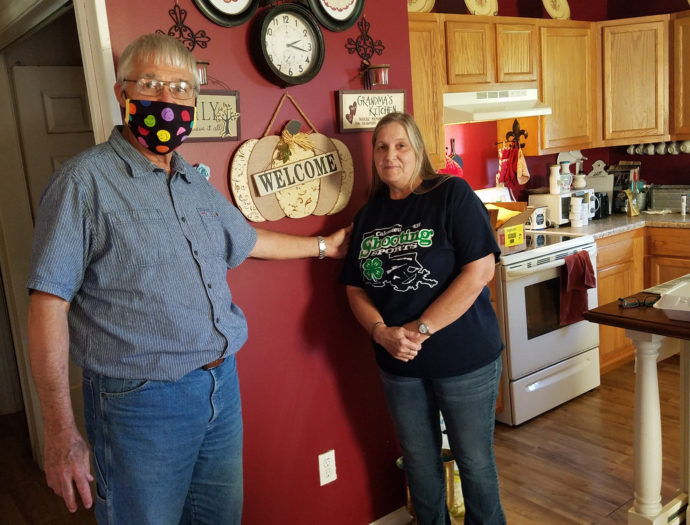 “I thought about you, Lord”

Reflections in the wake of Hurricane Laura

Carl Dube penned the following reflections after a long drive back from Cameron, Louisiana, to his home in Michigan. Dube was in the area assessing damage from Hurricane Laura, a deadly and destructive Category 4 Atlantic hurricane that tied the 1856 Last Island hurricane as the strongest hurricane on record to make landfall in the state of Louisiana.

A song by Willie Nelson, “I Thought About You, Lord,” helped frame Dube’s thoughts, which encompass his personal history of responding to hurricanes for MDS, and his conversations with the homeowners he met along the way.

It was a pleasant surprise when I came across a song by Willie Nelson that I hadn’t heard before—“I Thought About You,  Lord,” written in 1996 for his Spirit album.

My wife, Laura (not the hurricane), heard it during a virtual FarmAid concert, and passed it along to me.

I thought about trees

I thought about friends

And how rare it is to find one.

I thought about You,

The most gentle, sweet and kind one.

I thought about You, Lord.

I thought about You.

In late August 2020, as Hurricane Laura was approaching southwest Louisiana, I was doing a lot of thinking.

I thought about the five winters spent in Cameron with Mennonite Disaster Service after hurricanes Rita and Ike.

I thought about the MDS volunteers who repaired numerous homes and built 26 new ones.

I thought about those new homes, intended to withstand 140-mph winds.

Hurricane Laura was packing 150-mph sustained winds. Some later reports indicate gusts reaching 200 mph in a few locations. I thought about the clients for whom the homes were built and wondered where they had sheltered.

As the storm passed over Cameron and moved inland, reports of damage started to come forth. In the days that followed, the parish put hundreds of aerial drone photos and videos on the internet.

I was able to identify almost every one of the new houses we’d built. A few were missing. Many had damage, but looked to be repairable. A few looked untouched. I thought about those houses, and what each meant to the clients and to MDS. This storm provided a real-life test that no other group of MDS houses had ever faced.

After some discussion and several e-mails, a trip to Cameron Parish became a reality for MDS regional operations coordinator Darin Bontrager, longtime MDS leadership volunteer Clete Yoder, and me. A detour and delay due to Hurricane Beta was encountered, but eventually we arrived in Cameron Parish and set up our RVs.

The lower part of Cameron Parish was without electrical power; it would not be back for months. With our RVs we had generators, fuel and full tanks of fresh water, plus food sufficient for the days needed to inspect the homes.

Over those three days, we looked at every one of the 16 houses built by MDS in lower Cameron Parish. We saw houses standing tall, up on concrete columns that ranged from eight to 11 feet above grade. I thought of the families who would have something to repair, while their neighbors were left with empty slabs.

We saw two houses that had washed away completely. I thought about the surge of water that reports say was 15 to 17 feet high along the front chenier (ridge). The water was about three feet higher than the roof of one house that had washed away. Parts of the foundation and floor system were still there. I thought about the volunteers who had worked on those piers and framed the house.

I thought about the double-wide mobile home, neighbor to one of the MDS houses. It was torn from its anchor straps and surged into the columns supporting “our” house. Some of the concrete columns were still standing, but they were never designed to withstand the forces of a house slammed into them by wind and waves.

I thought about how that house had withstood Hurricane Ike. The columns had then resisted the impact of a timber crane mat forced into them by the storm surge in 2008.

We saw one house that was still mostly in place on the columns, but had been badly damaged. It was declared a total loss by the insurance adjuster. It was one of the first houses built by MDS. I thought about how current construction details MDS uses might have prevented much of the damage. Some local folks think a tornado might have been the deciding factor for this house, but there is really no way of knowing.

In the following days, we also inspected the other 10 houses built by MDS volunteers in other parts of Cameron Parish. Some of those showed no obvious signs of hurricane damage. Some had lost shingles or vinyl siding, and a couple had rainwater driven around the seals on exterior doors and windows by the 150-mph wind.

And I thought about You,

The one who is all-knowin.’

I thought about You,

Lord, I thought about You

In the days it has taken to drive back to Michigan from Louisiana, I thought about the clients and community we had encountered. We counted almost 20 people who had passed away since the last MDS volunteers had dedicated a home in Cameron Parish. When we met the ones who remained, one of the first things they said was: “Those MDS houses did well. They stood up to the storm better than almost any others.”

The wife of one family said, “We are going to repair this and move back in. We made too many wonderful memories in the 10 years we had this house to leave now.”

I thought about You

And the songs that I keep singin.’

I thought about You

And the joy that they keep bringin.’

We also met some new “clients” who bought one of the MDS homes only a few months before Hurricane Laura. The client we’d built for had passed away about a year earlier. Their insurance adjuster said that there was no reasonable expectation for that house to still be there. They were excited to meet some of the people responsible for this house that withstood the 150 mph winds and a storm surge two feet higher than the floor.

I thought about life

And a love that has no ending.

I thought about You, Lord,

I thought about you.

When I think about Cameron Parish, the names of Audrey, Rita, Ike and, now, Laura are part of life and history. There may be new names to add in the future.

After Hurricane Laura, there will be many years of effort to even remotely see life returning to normal in Cameron Parish. However, there are also many people who love living there… “a love that has no ending.” I think I’d like to see what it looks like then.