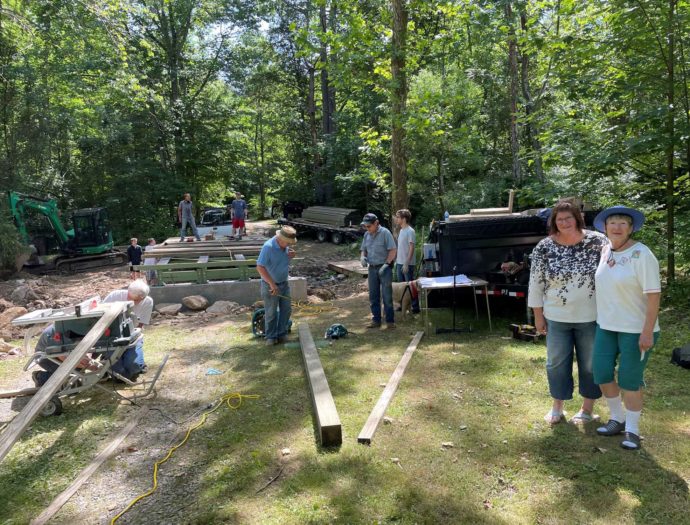 “I felt like my feet were nailed to the floor”

Sondra Smith, a native of Elkton, Virginia, remembers watching her neighborhood creek as a little girl.

“The creek was half the width that it is now,” she said.

When Sondra and her husband, Troy, moved back to Elkton 13 years ago after living in Oregon, they reached their house by driving over three culverts that, at one time, safely carried the creek water underneath the driveway.

But the rainfall amounts changed over time—and so did the creek.

“After we moved here, it didn’t take long for the creek to flood,” said Sondra. “Limbs and branches would come all the way down from the top of the mountain and dam the culverts.”

Sometimes, as the water rose above the culverts, Sondra and Troy found themselves stuck in the house for days. “We couldn’t go unjam the culverts,” she said, “and we couldn’t try to cross them—the force of the water was too strong.”

One day—when the creek was calm and Sondra was able to leave the house to attend a support group meeting hosted by the Valley Program for Aging Services, programs director Joyce Nussbaum noticed that Sondra looked a little down. Sondra had recently been trapped in the house—again—left to worry that she or Troy would be unable to get out for doctor’s appointments or, worse, an emergency.

“I felt like my feet were nailed to the floor,” Sondra said to the group, who not only listened but began having some key conversations.

Around the same time, an anonymous donor from Nussbaum’s church—Weavers Mennonite in Harrisonburg, Virginia—contacted Rodney Burkholder, who attends the same church. The donor offered to match a contribution from Weavers toward a local project. The church decided to build a new bridge for Sondra and Troy.

“Faith and generosity were evident from the very beginning in making this bridge a reality,” said Burkholder, who has been organizing flood response and driveway bridges for Mennonite Disaster Service (MDS) throughout the region.

When Sondra first heard the news that a new bridge was on the way, she had trouble believing it would really happen. “I had wanted it for so long, I thought: ‘Is this real?’ Are they really going to help?”

“After we moved here, it didn’t take long for the creek to flood. Limbs and branches would come all the way down from the top of the mountain and dam the culverts.”

The Smith’s bridge was the first built by MDS in Virginia. But its design—by JZ Engineering, a structural engineering and sustainability consulting firm in Harrisonburg—has been built and tested more than 100 times in West Virginia. On average, the bridges cost about $30,000 to build.

The flood-resistant driveway bridge designed by JZ Engineering is constructed from pipes sunk deep into the ground and encased in concrete abutments, then spanned with steel beams and topped with wood decking. The bridge is built for a weight limit of 7.5 tons—more than enough for an ambulance to cross.

“I never would have believed that,” said Troy.

When the bridge was dedicated in July, the Smiths also received a handmade comforter crafted by the sewing group from Weavers Mennonite Church.

“It is so appreciated and will always be a treasure I will always be so proud to have,” said Sondra. “It was a wonderful experience. The love from the whole circle was—and still is—a beautiful thing. I truly am just delighted with all the people. Everybody was sincere and upbeat.”

Nussbaum reflected that the bridge is not only a way across the creek for Sondra and Troy, but it also represents bridges built between people. “Volunteers came because they wanted to build this bridge. They enjoyed themselves.”

Sondra chimed in: “And they gave me strength to carry forward! I don’t ever want this to end.”

Now, when it rains, the Smiths don’t feel like their feet are nailed to the floor. “We sit on the porch, watch the creek, count our blessings, and thank God for our beautiful bridge,” said Sondra.