God shows His goodness, even in times of disaster

Nick Hamm is a long-time volunteer with MDS and former Chair of the MDS Canada Ontario Unit. He played a key role in leading and organizing the response to Hurricane Fiona in Nova Scotia. Now that MDS’s work in Nova Scotia is complete this year, he reflected on his time in that province, and what it meant to him and those served by MDS.

In the many years of serving with MDS, I have been reminded time and time again that the work we do is for the glory of God and because of the love of God, through his son Jesus Christ. God shows his goodness through his people even in times of disasters.

When God is an integral part of this ministry, He allows us to show this love in ways we could not do on our own. This was again apparent in how He convicted so many volunteers to respond to this disaster in Nova Scotia with your eagerness, energy, and skills.

Hurricane Fiona struck Atlantic Canada early Saturday morning, September 24. The eastern end of Cape Breton was severely impacted, not protected by any other land masses. The destruction was unprecedented for Canada.

MDS was introduced to Lynne McCarron, Executive Director for United Way Cape Breton, by our partner response agency, Samaritan’s Purse, which felt the PEI destruction was all they could handle.

After seeing how much destruction there was, MDS transitioned to a national response. MDS was the only agency helping homeowners with tree and debris cleanup until the Nova Scotia government hired the Department of Natural Resources to provide that service, five weeks after the hurricane. MDS has also been the only agency providing roof repair/rebuilding for the uninsured or underinsured, from both wind and fallen tree damage.

This is an economically depressed area due to the closures of their coal mines and steel mills, along with the moratorium on cod fishing. Glace Bay, the community in which MDS worked the most in, is also known for its opioid drug addiction problem, largely stemming from the drug dependence caused by pain alleviation from these former industries.

As for the volunteers, many of them were first time and many were younger; the average volunteer age was under 25 years. It was a grassroots movement where individual connections prompted other new volunteers to come forward—it was amazing!

God also provided us with some wonderful and talented leaders and volunteers in both chainsaw operating and in construction, which allowed us to make a difference in that community.

The partnership that developed with the United Way of Cape Breton, Red Cross, Cape Breton Regional Municipality (CBRM, the eastern municipality of Cape Breton Island), Emergency Management Operations in Nova Scotia, Camp Bretondean (a summer camp supported by Anglican churches in Cape Breton), and the Church of Jesus Christ of Latter-Day Saints, is also a testament to what can be accomplished by working together, as well as the respect received for our faith-driven energy.

It is difficult to convey the many thanks and tears expressed to me for volunteers by the residents we served, from other community members not needing our help but appreciating our presence, and from our partner agencies.

MDS was there from the beginning and stayed on while other groups, including the military, came and went. Our actions and vehicles with the MDS logo, representing “a helping hand in Christian love”, was noticed in the communities where we served.

Our volunteers were housed through the generosity of the United Way, initially in a local hotel and then at Camp Bretondean, an Anglican Bible Camp, which was eager to house us.

I know there are many stories out there, experienced by our volunteers who came to Cape Breton. I hope my thoughts give a glimpse of what happened there, and also encourages volunteers to consider more service mission trips in the future and to inspire more to consider serving in this meaningful way.

To God be the glory, great things He has done!

Read about MDS Canada’s response to Hurricane Fiona: “It’s like you gave them a big hug” 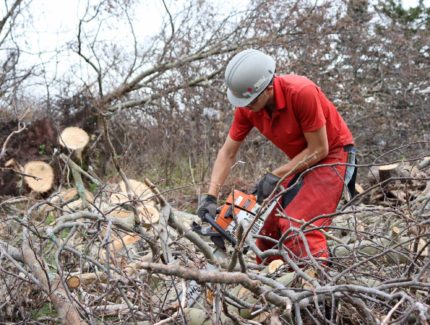