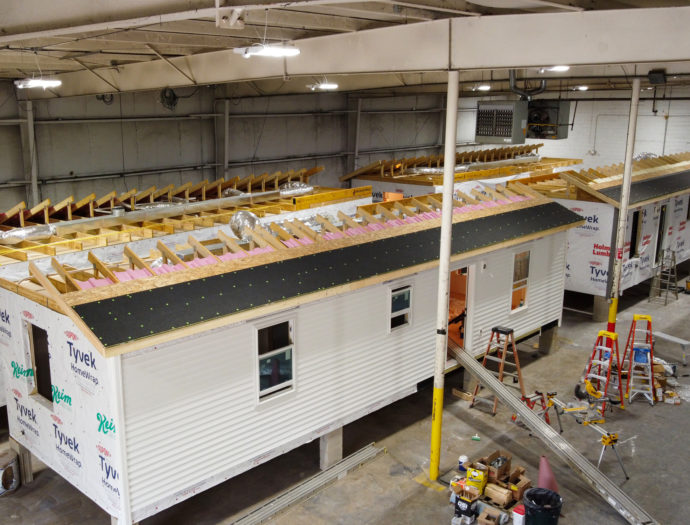 From Ohio to West Virginia: homes and hope arrive

Two homes in the mountains of West Virginia are nearly ready for occupancy, four years after floodwaters decimated communities and upended lives there.

MDS volunteers built the 1,000-foot modular homes by working inside a warehouse tucked in the small Ohio town of Strasburg. The homes were then transported nearly 200 miles to West Virginia.

Lynn Sheer, one of the homeowners, is simply overjoyed. Sheer recalls the specific day when her life was turned upside down: June 23, 2016—the day floodwaters rose and swept under her home in Chloe, West Virginia.

“I have a mountain on one side and a creek on the other,” said Sheer. “The water took out my foundation.”

With the foundation washed away, her home simply broke apart. Now living with her sister, Sheer said she is enormously grateful for MDS volunteers.

“They are the most kind people,” she said. “I cannot believe the goodness of what they are doing for me.”

Volunteer Linda Yoder, who worked on the homes, said she felt a caring connection with Sheer, even though they never met face-to-face.

“We can show people that there is somebody out there who cares for them,” said Yoder, who drove half an hour from her home in New Bedford to the warehouse to work for a day.

Although Yoder had traveled to MDS projects in the past—in Texas and West Virginia—this was the first single-day volunteer stint she’s had. She brought four coworkers with her, all of whom are first-time MDS volunteers.

“We don’t work on Saturdays, so it’s easy for us to come help for a day,” she said.

After a half day’s work, first-time volunteer Abigail Barkman piped up: “I’d like to do this again!”

With larger MDS projects closed because of the COVID-19 pandemic, more than 80 volunteers found an outlet for service inside the 30,000-square-foot warehouse where they could socially distance, wear masks and open the large doors for ventilation.

“We found the right volunteers, and it worked out really well,” said Maurice Stutzman, secretary-treasurer for MDS Region 2. His team dubbed the effort the “Adaptive Housing Project.”

Stutzman, who retired from a career as a medical doctor six months ago, explained the reason why he thinks “adaptive” is the operative word.

“Everybody thinks COVID is bad—and it is—but there is still good work able to happen safely—if we adapt,” he said.

While this was considered a pilot project, Stutzman said he’d encourage other MDS units to try this approach.

“I want to encourage people to work safely, not sit at home and give up,” he said, “because while there are people in need, our work at MDS is not done.”

The Adaptive Housing Project was successful, in part, because MDS cultivated partnerships with other groups, including Disaster Aid Ohio, West Virginia Voluntary Organizations Active in Disaster, and businesses which supplied warehouse space and materials.

And the area around Strasburg, Ohio is rich in volunteers, said Atlee Kaufman, a board member from Disaster Aid Ohio who was able to recruit many people who were grateful for the opportunity to work for a day at a time.

“Even during non-COVID-19 times, there are people who can’t leave for a couple of days or travel out of state,” he said.

“But they could help here—and that’s the part I like. Even people who are busy with their families want to take a day to help.” One of the biggest challenges for other communities that want to start their own Adaptive Housing Project will be finding a warehouse big enough to construct a modular home inside.

“It does take a big building to make this work,” acknowledged Gid Yoder, who serves on the Construction Committee for Disaster Aid Ohio. “On a long-term basis, securing a big building may involve extra expenses.”

Jim Smucker, president of Keim, a partnering business that supplied materials, grew up with parents who spent a lot of time on MDS projects. “My father took our family twice to build an MDS house from scratch,” he said.

Smucker sees the Adaptive Housing Project as an example of how people can innovate amid challenges.

“Around here, we have a lot of people who know how to build but can’t afford to go away for a week,” he said. “The mission of MDS is not only how it builds houses for people but what it does for volunteers who want to do something life-giving.”

“This is the kind of story we need for this world—and MDS proves this kind of story exists on a regular basis,” said Smucker. “The gift of giving someone a home is an amazing thing. To be a part of that is really encouraging and satisfying.”