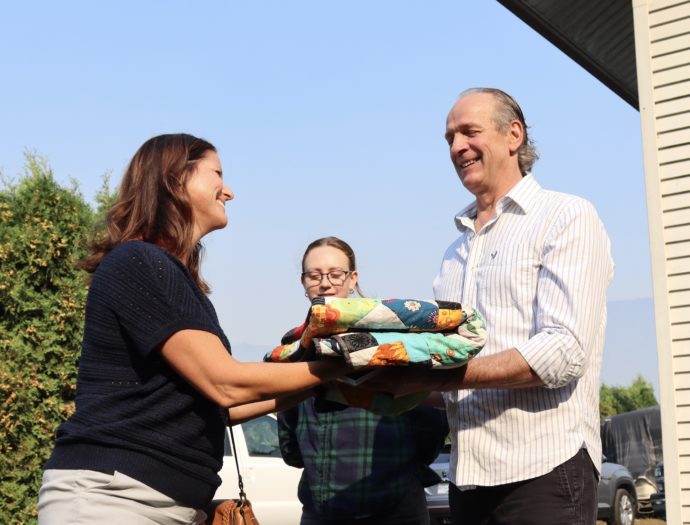 “Forever grateful for the help”

“What brought us together was a disaster, a loss, a trauma, something we can never forget.”

With those words, Mark Rempel of the Mennonite Disaster Service (MDS) B.C. Unit began the first of four home dedications on September 10 at the home of Ted and Michelle Swanson in British Columbia’s Fraser Valley.

Also in attendance was a representative from the Abbotsford Chamber of Commerce.

They all had gathered to celebrate the completion of MDS’s work following last November’s devastating flood.

One of the most severe natural disasters to strike the province, the flood was triggered by a weather system that dumped a month’s worth of rain in the area in two days.

Rivers and creeks, unable to handle the volume of water, spilled their banks and swallowed up farms, businesses and homes in low-lying areas. About 20,000 people were forced to flee to higher ground.

MDS responded by providing 65 volunteers and financial support to repair six homes in the Fraser Valley.

Another 135 people served in Princeton, 215 kilometres east of Abbotsford, where 40 flooded homes were repaired.

In his remarks, Rempel noted it was a different model for MDS than usual in Abbotsford.

It was not a traditional MDS project, Rempel said.

“Unlike our usual projects, where people volunteer for a week, we had day volunteers,” he said.

“Often the day before we didn’t know how many were coming, or their skill level. But it all worked out.”

Rempel noted donations began to pour in right after the flood.

“The question was, ‘What can we do?’” he said. “We wanted to use the money responsibly, put them to the best use possible.”

“We believe that we show our love for God by loving others,”

The goal with all the houses, Rempel said, was to “rebuild them to a standard as good or better than before.”

Fixing up the Swanson’s house posed some challenges. “But the right people with the right skills showed up at the right time,” he said.

Rempel praised the work of Shelley Dueck of Mennonite Central Committee B.C., who was seconded to MDS to be the project coordinator.

“It was a unique partnership with MCC,” he said, noting Dueck was also adept at painting and installing floors.

“It was a privilege to help, to come alongside people,” Dueck said, adding the quilt, like the work done by MDS volunteers, was “many little pieces and the product of many hands.”

In his comments, Ross Penner, Director of Canadian Operations, praised the work of the volunteers, calling them “the gold” of MDS, along with all who donated.

“We believe that we show our love for God by loving others,” he said. “That’s when we are living as we should be.”

Each dedication included the gift of a book of stories about the organization, its volunteers and the homeowners they served, and a handmade quilt—“a memento of hope,” as Dueck put it.

“We will forever be grateful for all the help,” said Ted. “We really appreciate it.”

The dedication was closed by Henry Warkentin, Chair of the MDS Canada board.

“The Bible is full of stories,” he said. Through MDS’s work in Abbotsford, “we have written some more.”

In addition to Ted and Michelle’s home, there were home dedications on September 10 at the homes of Sandy Faber, Al and Dorothy Balzer and Tom Johnstone.

MDS’s service in B.C. was also made possible by support from MCC B.C. 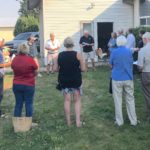