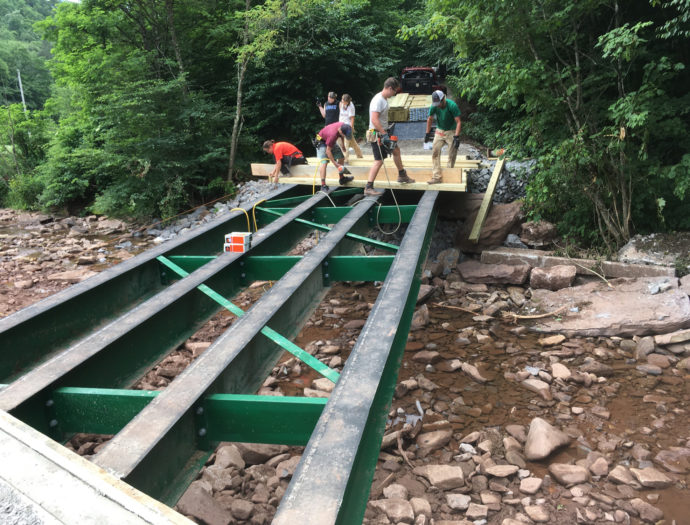 A crew from JZ Engineering—designers of the driveway bridges MDS volunteers have been building for several years in West Virginia—volunteered in July to build a bridge in Pocahontas County.

Johann Zimmermann, principal engineer, and his employees Jacque Zook, Joe Hochstetler and Sam Rhoads have designed bridges, roofs and other structures that have helped hundreds of disaster survivors from West Virginia to Puerto Rico.

They spent a week away from their Harrisonburg, Virginia-based home office to help five families in the mountain community of Pocahontas have easier and safer access to their homes from the highway. The families had been waiting for more than four years since a flood had washed out the communal bridge connecting their homes to the main road.

Adhering to MDS’s COVID-19 safety guidelines, volunteers were able to finish the bridge in less than a week. They camped in the nearby woods in separate tents and cooked their meals outdoors.

In addition to helping families get much-needed bridges, the hands-on volunteering helped the company improve its designs, Zimmermann said.

Zook agreed with Zimmermann that hands-on work is one of the best teachers for design.

“I can sit at my desk and try to think through all the details and how a contractor may try to build it, but until I’ve actually seen and experienced the process myself, I’m most likely going to miss certain aspects or make the design harder to build,” she said.

Hochstetler said that building the bridge was “incredibly helpful” for future designs.

“During the build we found places on our plans where more or different information would make the design clearer,” he said.

As a result, future MDS volunteers will find the driveway bridges easier to build, said Rhoads.

“This could be from a constructibility standpoint where certain details could be improved upon to make them easier to build in the field, or improving details on the drawings so they are easier to understand in the field for anyone,” he explained.

The group was also able to interact—outdoors and from a distance—with pastor David McCall, one of the homeowners.

“He has a respirator for breathing issues, so we were very careful about not interacting with him too much due to COVID-19,” said Zook. “But he offered us his back porch to use for cooking and eating, so a few evenings he came out and sat on the far side to chat with us.”

Zook described McCall as “definitely passionate about sharing Jesus,” adding that he also told stories of “what life is like living tucked up in the mountains of West Virginia.”

McCall’s wife passed away last year, and she always believed that, someday, they’d have a new driveway bridge, Zook noted.