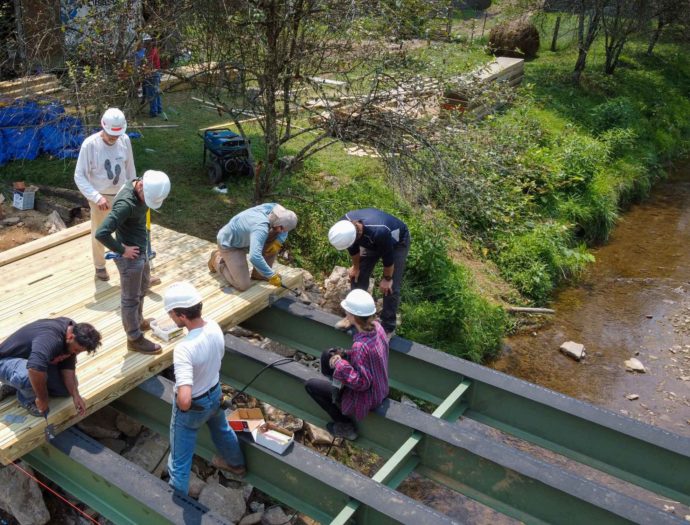 Engineers In Action, MDS build bridges over creeks—and between people

Dennis Vance, a farmer and pastor, loves his community of Lizemore, West Virginia. He joyfully shared that love with college students who built a new driveway bridge in July, giving him safer access to his home.

“Lizemore is the only place with that name in the whole country,” said Vance, who cares deeply about his mountain town and the 890 people who live there.

With a small creek flowing peacefully underneath his nearly finished driveway bridge, it’s hard to imagine the flood in 2016 that destroyed scores of homes and washed out hundreds of driveway bridges in the state.

“The flood washed out the rocks that had been holding the old bridge,” said Vance. “I’ve lived here for 46 years and that’s the deepest water I’ve ever seen.”

He is overjoyed that ten engineering students from Rutgers University and University of Illinois have traveled into, as he describes, “the middle of nowhere,” to build the 32-foot-long bridge. The young people are part of the Engineers In Action Bridge Program, which connects students with opportunities to use their skills to make a difference in communities across the world.

“I’ve met all the students,” said Vance, “and they are all good people. You see all the bad stuff in the news about young people because that’s what sells. But these young people give me hope for the future.

Now, he said,“I’ll be able to get in and out of here without worrying about falling into the creek,” adding that the driveway bridge will also provide access to seven other families living up the hillside.

Pastor of the local Free Will Baptist Church, Vance previously worked in the coal mines for 20 years. Despite the threat of repeat flooding, he believes Lizemore is a good place to live.

“The people are friendly, and it doesn’t cost a lot to live here,” he said. “It’s home, and God has always provided.”

As he watched the students construct the driveway bridge, Ethan Gingerich, director of the Engineers In Action Bridge Program, explained how the project is a collaboration between Engineers In Action, Mennonite Disaster Service (MDS), West Virginia Voluntary Organizations Active in Disaster (WV-VOAD), JZ Engineering, and corporate mentors and sponsors.

Gingerich, who has previously served with MDS as a volunteer, is also a former employee of JZ Engineering. The structural engineering and sustainability consulting firm in Harrisonburg, Virginia was the first to design a flood-resistant driveway bridge constructed from pipes sunk deep into the ground and encased in concrete abutments, then spanned with steel beams and topped with wood decking.

A key aspect of the design: it can be built by volunteers from MDS and other groups. Those volunteers have, over the past five years, built more than 100 driveway bridges.

When international travel for Engineers In Action students shut down because of the COVID-19 pandemic, Gingerich began looking for opportunities—and partners in service—in the United States.

He recruited his friend, Colton Frey—the two men attend Zion Mennonite Church in Broadway, Virginia—to serve as an MDS site coordinator for Engineers In Action volunteers as they build four bridges over the summer in West Virginia.

MDS also provided a tool trailer, lodging and cooks for the students. WV-VOAD chipped in a backhoe (and its operator), as well as case management to help find people who need driveway bridges the most. It also coordinated material purchasing and delivery.

“We are building literal bridges and metaphorical bridges,” reflected Gingerich, who is grateful for MDS and other partners in this effort.

Taking a break from teaching students how to safely use a nail gun, Colton Frey reflected on why he came to spend his entire summer as an MDS site coordinator. The second-grade teacher began working on the bridge project the day after school ended and, by the time the four bridges are complete, he’ll have only two days off before school starts again.

“I get to do two things I really love to do—teaching and construction—while at the same time helping people who really need it,” said Frey.

“The flood washed out the rocks that had been holding the old bridge,” said Vance. “I’ve lived here for 46 years and that’s the deepest water I’ve ever seen.”

— Dennis Vance, a farmer and pastor

Civil engineering student Muhammad Noori, originally from Pakistan, is a junior at Rutgers University. “Building this bridge has given me more insight into college life,” he said. “Colton is guiding us, and the time we spend together is really important.”

Alex Sitarz, also a junior studying civil engineering at Rutgers, said the hands-on experience at the job site has deepened her learning.

“It’s also fun to meet the person who is going to be using the bridge,” she said, adding her thanks to Dennis Vance for hosting the students on his farm and sharing some fresh eggs.

“This gives me a sense of how important it is to help my neighbor,” she added.

Emily Shao, a sophomore studying civil engineering at University of Illinois, reflected that the students have been very supportive of one another. “We’re not competing against each other, but working together,” she said.

All the students agreed that, as they meet people in the community, they understand in a deeper way how long it takes to recover from a flood disaster.

“I see how this community got hit by something so devastating, so I’m glad to help,” said Stratis Papageorgakis, a sophomore at University of Illinois who is originally from Greece. “I’m also learning how to work as a team on a project site.”

In the course of the project, Papageorgakis has gotten to know his fellow University of Illinois student Raj Patel, who said he values his new friendships as well as the opportunity to travel to a community he otherwise would likely never get to see.

Jacob Dolas, a junior at University of Illinois studying civil and structural engineering, said he joined Engineers In Action because he wanted to go out and do hands-on work.

“We are helping improve the daily lives of people,” he said, “and at the same time meeting friends our own age.”

The students look up from their work to see another Lizemore resident, David Lynch, driving across his new driveway bridge, completed a couple weeks before with the help of students from the Duke and Cornell chapters of Engineers In Action.

Some pieces of the old bridge are still piled beside the creek, and Lynch points to them: “Every year, that bridge would sink a little lower,” he said. “Then the flood hit, and it was just historic.”

Lynch did the best he could to rebuild his driveway bridge. But he was always worried about tumbling into the creek.

“The old bridge would just be a-clamorin’ and a-clankin’ every time you drove over it,” he said. “My daughter would refuse to drive over it.”

“This is a blessing. I feel like people are more laid back here,” he said. “We’re the second poorest state in the union, but we get along with a little help—and we help each other.”