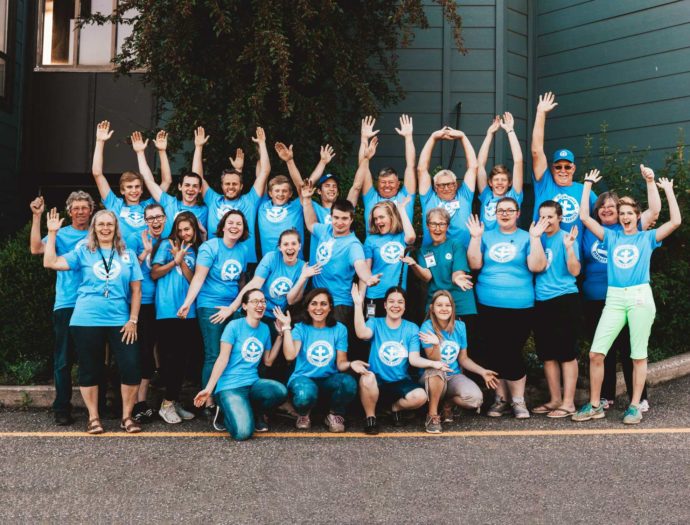 During National Volunteer Week, MDS thanks the hearts and hands that serve

As we observe National Volunteer Week from April 18-24, Mennonite Disaster Service extends its thanks to all those who have served during the past year—amid exceptional challenges posed by COVID-19, as well as many other disasters.

From sewing masks to donating to COVID-19 relief funds, from working on local MDS projects to traveling amid strict COVID-19 safety protocols, MDS volunteers have found creative ways to help those most in need.

Sometimes this meant quickly changing plans as projects were delayed or suddenly opened up.

First-time MDS volunteer Trish O’Grady had her heart set on traveling to Paradise, Calif. to help that community following devastating wildfires in 2018.

When that project got delayed, she decided to serve on the other side of the country with the MDS RV Program in Rockport, Texas, repairing homes damaged by Hurricane Harvey in 2017.

O’Grady, who lives on the Colorado Western Slope, ended up staying in Rockport for the entire month of February. “I knew I wanted to volunteer somewhere, and I knew I could drive my RV,” O’Grady said.

Sometimes volunteers responded with only a few day’s notice. That was the case for MDS volunteer Harold Zimmerman, who traveled from his home in upstate New York in mid-March to help repair broken pipes for residents of Victoria, Texas—many of whom had been without water for weeks in the wake of a February ice storm.

Zimmerman, who is self-employed in refrigeration, gathered a group of four and, he said, “we hopped in the truck.”

He’d never been that far south before. “The weather was nice, but it was definitely a bit of a culture shock,” he said. “It was really good to help people out. If you go on a vacation, you might as well help somebody.”

At times, the delays became painful for volunteers who felt deep compassion for disaster survivors.

LeRoy and Doreen Janzen were all set to travel from Beatrice, Nebraska, to Marianna, Fla., in January to serve as project director and office manager for the MDS project in the Florida Panhandle community hard-hit by Hurricane Michael in 2018.

"Volunteers have continued to transform their service, grow their faith, and bring hope wherever and whenever they serve. They are the shining heart an soul of MDS."

After first receiving word that the project would be delayed, they finally received the sad news that, due to COVID-19, the Marianna site would not open in time for them to serve at all.

“I understood, and I felt it was the right thing to do, but it really hurts because I know so many people there don’t have a place to live,” said LeRoy.

Now the Janzens, who have volunteered many times for MDS in the past, are eagerly awaiting for the right opportunity to serve as MDS leadership volunteers.

“We’ll figure out when it works,” said LeRoy. “The good Lord has a plan for us.”

Added Doreen: “We don’t have a next project but we know it’s coming.”

In the midst of all that, sometimes things worked out perfectly, too. That was the case for 18-year-old Chris Stoltzfus.

After hearing MDS needed volunteers, Stoltzfus traveled from Lancaster, Penn., to Paradise, Calif., to volunteer from Feb. 28 through March 28.

“We built a tiny house, cleaned up brush for a church, replaced a ceiling in another church, and dug some trenches for sewer lines,” he said. “It was amazing.”

This was his first time volunteering for MDS but it won’t be his last. “It was a lot more than I expected,” he said. “Absolutely I will volunteer again.”

These are only a few of the hundreds of volunteers who have shown resilience and the ability to discern creative paths of service, said MDS Executive Director Kevin King.

“Volunteers have continued to transform their service, grow their faith, and bring hope wherever and whenever they serve,” said King. “They are the shining heart and soul of MDS.”