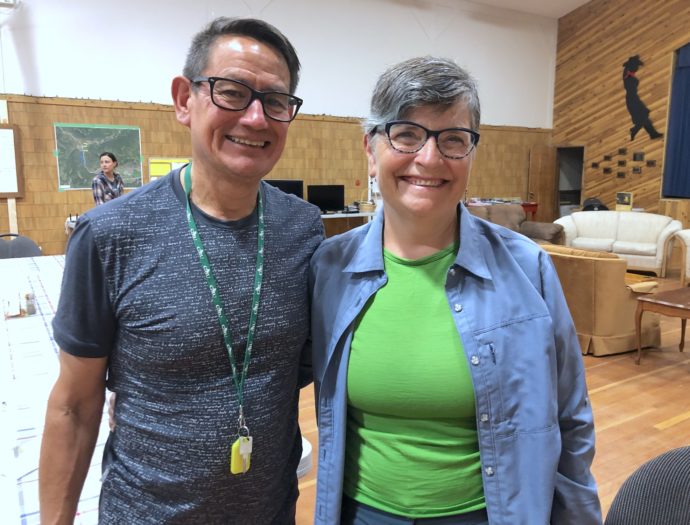 While serving in Monte Lake, John and Kim Alexis “listen for God’s heart”

A Mennonite Disaster Service (MDS) work site is often a beehive of activity. You wouldn’t normally think of it as a place to practice contemplation.

But that’s not how it was viewed by John and Kim Alexis.

The couple are part of Imago Dei Church, a contemplative congregation in Vancouver, B.C. that is part of the B.C. Mennonite Brethren conference. Each day as they served as volunteers with MDS in Monte Lake B.C. in mid-June they found time to reflect and pray.

“I can pray while doing tasks at the work site,” added John, 62. “It allows me to present to God during the day.”

Through contemplation, the two took time while working “to listen to God’s heart” while working, as Kim put it.

This included praying for others—the homeowners, other volunteers, and others brought to their minds.

They did this while raking sand, gluing a subfloor, stripping forms, pouring concrete or waiting out the rain that fell four out of five days the week they were in Monte Lake.

“It’s about staying in the moment, thinking and praying, being in the presence of God and God’s love,” she said.

“It’s about a close walk with Jesus,” added John. “Work can also be a form of contemplation.”

They acknowledge not every task lends itself to contemplation; there are tasks that require full concentration. But overall, serving with MDS gave them time to reflect on their relationship with God and with others.

“We are always rushing around, not able to hear what God is saying,” said Kim, noting the couple has done three pilgrimages, including the Camino de Santiago in Spain.

By being intentional about contemplation, “I can focus on who I am, not just what I do,” she said. “Service is a way to be contemplative.”

For Kim and John, parents of four and with two grandchildren, it was their first time serving with MDS.

The couple—she is a retired Creative Memories consultant, he worked as an environmental specialist for Indigenous and Northern Affairs Canada—had thought of doing MDS before. But the projects all were so far away in the southern U.S. or California.

Then MDS called for volunteers to help people in Monte Lake, just over four hours from

It was a good experience.

“It’s a way to give back,” said Kim, adding they like meeting new people and getting to know them.

“MDS fits with who we are and how we see things,” she said, noting she grew up in a Mennonite Brethren church where the idea of service and helping others was promoted.

For John, the experience had additional significance. An Indigenous man, his home community is the Syilx Okanagan Nation located just south of Monte Lake in nearby Vernon.

“That is my ancestral land,” he said. By serving with MDS in the area “something resonated in my heart. I am familiar with that land.” 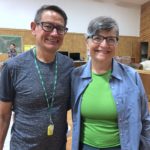 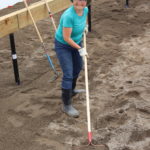