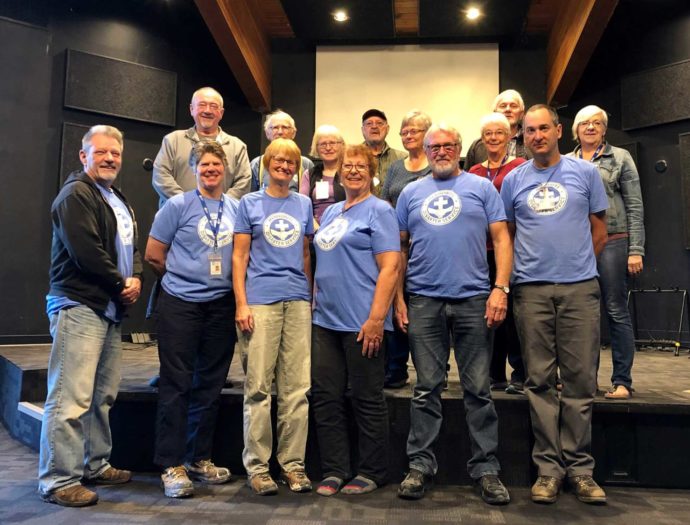 Came as strangers, leaving as friends

“We came as strangers. We leave as friends.”

Before the flood, he said, Grand Forks was just a place for him and his wife and co-director, Susan, to drive through.

Now, after many weeks spent in the city, “it is a place to stop and see our new neighbours.”

Thiessen was addressing representatives from city hall, local businesses, the long-term recovery team, and area churches, along with people whose homes were rebuilt by MDS at the event, held at the River Valley Community Church.

During the six months MDS was in the city, he said, over 200 volunteers from five provinces, seven states and Mexico and Germany restored 15 homes, giving over 16,000 person-hours of free labour.

“Now they have gone home, but they take the story of Grand Forks with them,” he shared.

Thiessen went on to thank local businesses and suppliers who worked with MDS, and the case workers who identified people in the community most in need of MDS’s help.

“We couldn’t have done it without you,” he said.

He gave special thanks for the River Valley Community Church, which hosted MDS, allowing trailers and motor homes to be parked in the parking lot and giving up the basement and part of the upstairs for meeting, eating and sleeping areas for the volunteers.

“They allowed us to take over their home for six months, and did it with so much grace,” he stated. “It’s a reflection of their care and commitment to their neighbours.”

In response, Grand Forks deputy recovery manager Chris Marsh thanked MDS, saying “this has been a hard year for so many in Grand Forks . . . the help of MDS was humbling. We couldn’t have done it without you, and the other agencies that came alongside.

“Day-in and day-out, you gave. Thank-you from the bottom of our hearts.”

The celebration included comments from Gabe and Rachel Warriner, pastors of the River Valley church.

“So often the church struggles and fails to be the outstretched arms of Jesus,” Rachel said. “To them the church appears irrelevant, unnoticed and unimportant.”

But once-in-a-while, she continued, “something special happens. Every now and then an opportunity presents itself and the miracle and wonder of people surrendered to the love of Jesus causes the communities we live in to be transformed.”

The flood of 2018 was one of those opportunities, allowing the city “to see and experience first-hand what the church was designed to look like: People who love people with the love of Jesus.”

She thanked MDS on behalf of the church, saying “we’ve been encouraged and inspired by the presence of MDS in our community. It has allowed us to see, once again, what is to love like Jesus. For six amazing months, Jesus was here, rebuilding homes and lives through MDS. We will always be thankful to God and to MDS for that testimony.”

And now, she concluded, “the churches of Grand Forks have the opportunity and the mission to carry on where MDS leaves off. I hope we don’t fail to be the outstretched arms of Jesus.”