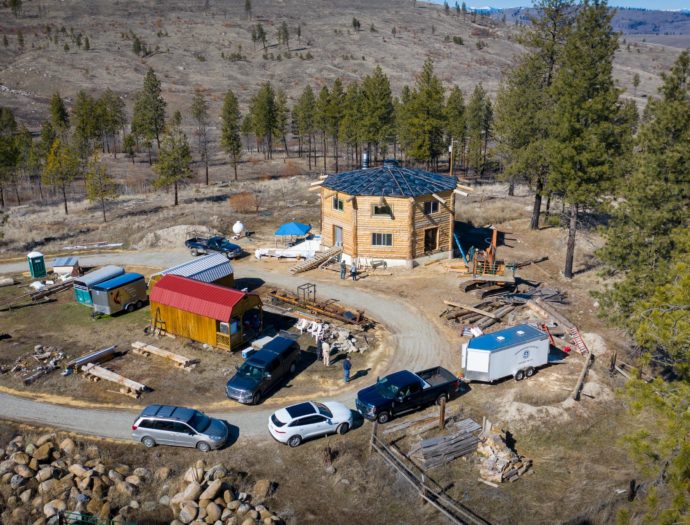 When Carl Dube describes his visit to the small community of Cameron, Louisiana, he sounds as if he’s checking on his neighbors.

Dube, who served in the Gulf Coast town as a project director with Mennonite Disaster Service (MDS), remembers every one of the 26 new houses MDS built there between 2007 and 2011.

So it’s no surprise after Hurricane Laura struck Cameron in August 2020, Dube made the drive from his home in Michigan to check on his “neighbors.”

“What I was really excited about after the trip down there was how well those houses did,” said Dube, who assessed damages for MDS and visited homeowners he hadn’t seen in years.

MDS built those homes to withstand 140-mph winds. During Laura, all of them were subjected to a minimum 135-mph sustained winds, and even stronger gusts—some of which, parish officials reported, were as high as 200 mph.

That the houses survived is a tribute to the work of the MDS Construction Committee, an often behind-the-scenes group that combines expertise in damage assessment, structural engineering, and ever-evolving knowledge on building codes and new materials.

To put it simply, MDS builds back better.

“MDS’s latest house design is not only appropriate for coastal hurricane areas, but for tornado-prone areas where high winds are a high risk,” said Jerry Grosh, MDS field operations manager.

“The principle of ‘building back better’ is the right thing to do, whether the house is in a hurricane zone, a flood zone, tornado alley, or a wildfire area.”

Prior to 2007, MDS was well-known for building sturdy homes but volunteer crews didn’t use a standardized plan.

Over time MDS project directors and damage assessors began pooling their knowledge, taking a look at plans from homes built in Princeville, N.C., Mississippi, and other disaster-experienced locales.

“As the years went on, we got more information—and better details,” explained Dube, “As we looked at houses, you could see the improvements, and how much the changes meant to the integrity of the house.”

After many years of leading the design for constructing industrial facilities, Yoder was one of the first MDS leaders to work with an architect on a national level to design—and then redesign—homes to reflect what MDS was learning in the field.

Yoder remembers when house plans were sketched on notebook paper.

“At least it wasn’t a napkin,” he joked. “I worked as a liaison between the architect and the MDS Construction Committee, and an architect began developing our plans with guidance from us.”

The more the Construction Committee learned in the field, the stronger the houses got.

It took a few years for project directors and volunteers to actually use the plans in the field, recalled Yoder.

“It was slow,” he said. “Most people have their own ways of building things. But as people come and go, and come and go, we keep working with them on how to build a better and stronger house.”

Yoder felt very encouraged when he helped Dube assess the houses in Cameron.

“Carl put them in sequence, from the first builds to the last builds, and it really stood out how our construction started improving. The design was stronger and the houses were holding up better.”

When the MDS Construction Committee assesses the condition of MDS-built homes in the wake of a disaster, it’s with a critical eye. Even though there is joy the homes are still standing, they ask:  “What’s the weak point?”

They take in many factors when deciding to tweak the design and plans: cost, ease of handling for volunteers, availability of materials, and, most of all, disaster durability.

“Some materials will save money, and some will make it easier for volunteers to put together,” said Dube. “For example, we saw that metal roofs withstood the wind so well,” he said, “and as a result the inside of those houses stayed dry.”

But metal costs more. “And yet,” Dube asked, “how much does it cost to redo all the insulation and drywall inside the house if the rain comes in through missing shingles?”

In Cameron, the Construction Committee determined that the weakest point was often the roof cladding—what’s used to cover the roof, creating a watertight layer that keeps the elements out and the stuff inside warm and dry.

“When the wind blows, you get high concentrations of uplift forces, and shingles tended to blow off in some places,” said Johann Zimmermann, principal engineer at JZ Engineering in Harrisonburg, Va., and a long-time MDS consultant.

“We then look at the question of whether the shingles were poorly installed—or if that’s simply the best shingles can do in a high-wind situation.”

Zimmermann agreed with Dube: metal roofs fare better. Zimmermann observed this in Puerto Rico as well, where hurricane winds tend to be even worse than those along the Gulf Coast.

“What we did in Puerto Rico was, even though we put on metal roofs, we installed a membrane that sticks to the wood sheathing so it does not get blown off.”

The takeaway for volunteers

With their cumulative knowledge gathered over many years, and their handle on rapidly-changing building technology as well, the Construction Committee has a message for volunteers: do your very best to stick to the MDS plans.

When in doubt, Zimmermann added, volunteers should follow the lead of their project directors.

“Ensuring volunteers follow the plans is a big job for the project director,” he said. “Somebody coming from Ohio might not understand the need for the kinds of roofs built along the Gulf Coast.”

Ultimately, Dube said, sturdy houses aren’t just about choosing building materials and tweaking designs: they’re about the people who live inside them. And many of those people in disaster-vulnerable communities have developed a deep trust in the MDS-built home and the volunteers behind it.

“When I drove to Cameron, people saw the MDS logo on my truck,” Dube recalled. “They came out, they came up to me, and they said, ‘When are you coming back to build more Mennonite houses?’”