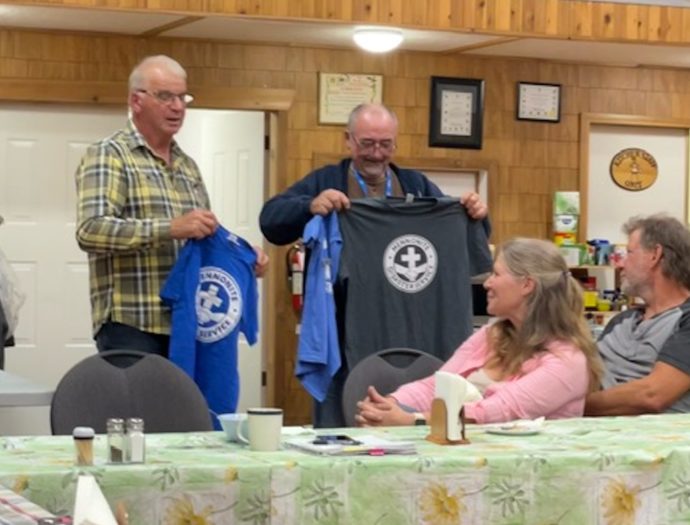 Volunteers raise almost $5,000 for those affected by wildfire

Anita Jacobsen knows she was lucky.

When the White Rock Lake fire swept through Monte Lake, B.C. in July 2021, it spared the house she lives in with her husband, David Newcomb—one of the few in the rural community that wasn’t destroyed or damaged.

“The fire ran out of steam before it got to us,” she said, noting they live about ten kilometres/six miles off the main highway.

“Everyone close to the highway was affected.”

Feeling blessed by her good fortune, Jacobsen decided to help others in the community who weren’t so lucky. She decided to raise funds to help them, starting with a raffle and creating a GoFundMe page.

“It was just a little fund, but I wanted to give something to everyone affected by the fire,” she said.

Then Mennonite Disaster Service (MDS) came to the rescue—through an auction.

One of the volunteers the week of September 11-17 was Paul Thiessen of Saskatoon. Thiessen, who is retired from the furniture business, once also worked as an auctioneer.

After learning about some of the needs Jacobsen was trying to meet, Thiessen suggested to Project Director Roman Heuft they hold an auction for the volunteers one night after supper.

In addition to doing the auction, Thiessen offered to auction off some handmade rocking horses he made for his grandchildren and others.

Heuft quickly decided to include some of his homemade charcuterie boards, and also grabbed some MDS T-shirts, hoodies, hats and pens.

They also invited Jacobsen and Newcomb to come for supper that night and tell their story. Jacobsen brought a jar of honey for the auction.

“It was just going to be for fun and to raise a little money for the community,” said Heuft of the auction, which was held September 15 after supper and sharing by the 24 volunteers at the project that week.

“I was floored,” said Heuft. I had tears in my eyes. There was such a genuine bunch of people there. They were as generous with their finances as with their time and effort. It was wonderful.”

Jacobsen was “blown away,” too.

“I was thinking maybe they’d raise a few hundred dollars,” she said. “I cried when I saw the total.”

For her, the auction, plus all that MDS has done in the community—rebuilding four new houses to replace those destroyed by the fire—has been “too good to be real.”

“MDS has done so much for us, it’s completely over the top,” she said, adding that after the devastating flood hit B.C. in November 2021, she thought their community would be forgotten.

“MDS just came in and made a difference,” she said. “It gives people hope. Not enough good words can be written about what MDS means for this community.”

As MDS Canada’s work in Monte Lake winds down, we invite you to consider donating to support our work in Atlantic Canada due to Hurricane Fiona. Click here to make a donation.