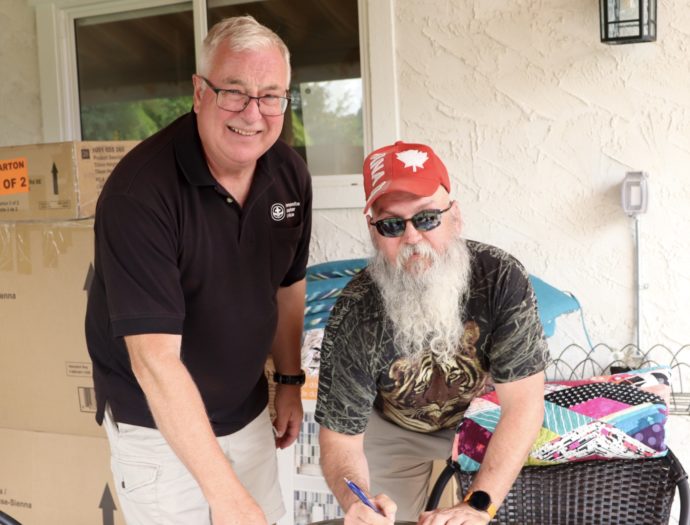 “A slow walk out of darkness”

Tom Johnstone dealt with flood, loss of his wife to cancer, with support from MDS

Asleep on the second floor of their house in Arnold, B.C. Rebecca and Tom Johnstone didn’t know the flood had arrived.

“We didn’t hear the siren,” said Johnstone, 55. “A neighbour came to the door and told us to get out.”

Johnstone carried Rebecca, who had a history of heart issues, down the stairs and pushed her out the door in her wheelchair before carrying her into the car, along with their pets and personal belongings.

They spent a week in an evacuation centre in nearby Chilliwack before she began to have trouble breathing. She was readmitted to hospital.

“I didn’t have space to think about the house,” said Tom of his time supporting his wife during her illness. “I was mentally, emotionally and physically exhausted.”

While in the hospital, Rebecca was diagnosed with cancer.

“It was a hard time,” said Johnstone. “The house was the last thing on my mind. MDS took the burden off me.”

When Mark Rempel of Mennonite Disaster Service’s (MDS) B.C. Unit said the organization would repair his house, Johnstone was overwhelmed.

“So many people came out of nowhere to help,” he said, adding it allowed him to spend time with his wife in the hospital.

Rebecca’s condition improved enough she could be released to come back home where she could use a walk-in shower built by MDS—something that isn’t standard issue, Rempel said.

“We don’t normally do that, but the best bathroom tiler in the area volunteered to help so we were ready to go,” he said.

Johnstone noted she only used it once, “but she appreciated it so much.”

“So many people came out of nowhere to help,”

Unfortunately, Rebecca had to return to the hospital after a month. She died May 3 at age 56. She and Tom had been married 32 years.

“It was a short time, but she could say she had a home again before she passed,” Johnstone said.

What was especially meaningful for Johnstone was forming a bond with Rempel over the loss of their partners—Rempel’s wife, Heather, passed away from cancer in 2008.

“It was a special time, walking with Tom in his time of loss,” Rempel said.

“He shared his story of losing his wife to cancer, he said he wanted me to know I wasn’t alone,” said Johnstone.

The time since the flood and Rebecca’s passing has been “a slow walk out of the darkness,” said Johnstone, who is planning to retire next year from his work as an armoured car driver.

On September 10, Johnstone signed the job card at a home dedication to finalize the end the repairs to his house.

“With help, I’m getting there, I’m seeing the light,” he said, adding “MDS was there when I needed it the most.”