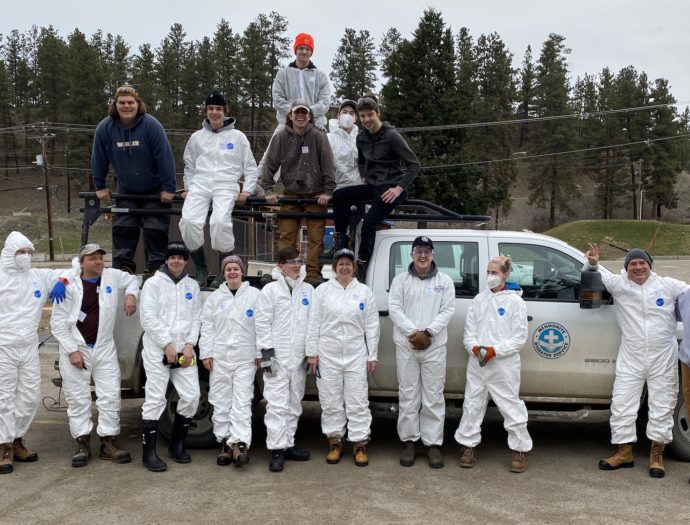 A great time for building relationships

Youth, leaders from The Meeting Place in Winnipeg do service in Princeton, B.C.

Youth and leaders from The Meeting Place in Winnipeg in Princeton, B.C. Brian Kauste and Denis Sabourin, far right.

For some youth at The Meeting Place, a Mennonite Brethren church in Winnipeg, 2020 was going to be a big year—they were going to do a spring overseas service trip.

But then the pandemic hit.

“We had done a lot of fundraising and planning, but then it all came to an end with COVID,” said youth and family pastor Brian Kauste. “It was really disappointing.”

At first, they thought they could do it again in 2021, but the ongoing pandemic prevented that, too.

“MDS needed volunteers in Princeton to help people recover from the flooding, and the youth were still eager to serve, so I thought why not put the two together?” he said, noting the downturn in cases made travel safer.

Kauste wasn’t sure if it would be a fit for the church.

“Serving with MDS wasn’t part of our rhythm, he said, adding none of the youth had any construction skills.

“But then I thought it would be worth a try, a good opportunity for the kids to get out of the city, try something different and help others,” he said.

Plus, he added, “Denis told us no construction skills were necessary, just a willingness to work hard.”

It turned out to be a great experience for the 12 youth and their leaders.

“The youth just dug right in,” said Kauste. “There was no complaining even when they were asked to go into crawl spaces to muck them out. I could see they really took pride in their work, and I watched their confidence grow.”

“I could see they really took pride in their work, and I watched their confidence grow.”

Kauste also enjoyed seeing them relate to homeowners. “It was great to see them engaging them,” he said.

Sabourin, who served as crew leader, was also impressed.

The trip was also a good opportunity for the youth and leaders to get to know each other better, Kauste said.

“We knew each other from weekly youth meetings, but this was a great time for building relationships,” he said. “We got to know each other in new ways.”

One wrinkle along the way was transportation. Due to flight issues, the group arrived two days early in nearby Penticton, the closest airport, without a way to get to Princeton, 112 kilometres away.

When the general manager of the Princeton Posse, the town’s hockey team, heard about their dilemma, he offered the team bus to pick them up Saturday and take them and bring them back again a week later.

“The team supplied the bus and the driver and the town paid for it,” said Sabourin. “Things really fell into place. We were so blessed.”

Other highlights for the trip included when the town’s mayor, Spencer Coyne, dropped by the worksite with donuts, and the group was featured in the local newspaper and on TV news.

“It was a great experience,” said Kauste, adding “we will do it again with MDS.” 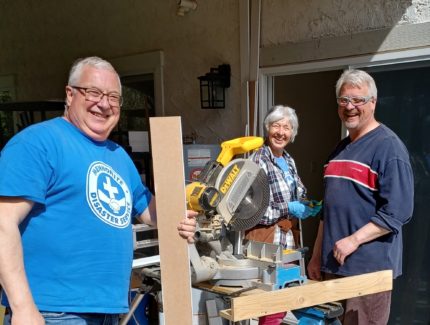